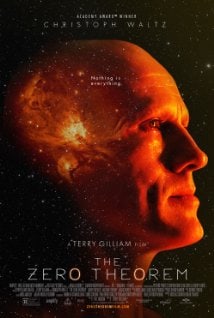 Few directors develop the kind of legend surrounding Terry Gilliam. He’s a cult filmmaker known to hundreds of millions. He’s an idiosyncratic iconoclast who works with movie stars and major studios. He faces epic struggles to make his films, yet he’s worked steadily and productively since the ’60s. In short, he’s hard to pin down. GIlliam’s new film The Zero Theorem may be his most typical work since 1988’s The Adventures of Baron Munchausen, which is to say, it’s confusing, sometimes off-putting and dense. It’s also his best, most fully realized film in years.

From the very first shot of the movie, there’s no doubt that this is Gilliam at work. An ominous maelstrom hangs in the darkness. A naked, bald man (Christoph Waltz) observes it desperately, flanked by weird machinery in a cavernous space, until he’s interrupted by that most banal of things: a ringing phone. This opening sequence is a summation of Gilliam’s entire career, encompassing his fascination with abstract forces, man’s vulnerability and our preoccupation with the ordinary. It’s an extraordinary start, but The Zero Theorem takes a while to regain its footing.

The naked man is Qohen Leth, an eccentric computer programmer who refers to himself in the majestic plural and works at Mancom, a company whose actual function is as generic as its name. He lives in a decrepit chapel that at first (knowing Gilliam) seems like it might be the last occupied building in the world. But Qohen’s morning commute turns out to be full of noise and fury. In a nice piece of sound design, Qohen pauses to steel himself before opening his door to leave home; the silence is broken by an instant riot of jackhammers and traffic.

His work is no better, composed of the director’s trademark mixtures of anachronistic technologies and canted angles. His supervisor Joby (David Thewlis) perpetually calls him “Colin” and refuses to let him work from home. When questioned about this, Qohen grudgingly admits that he’s waiting for a phone call that will reveal the very meaning of existence. With justification, Qohen is considered insane, but is very good at his job. These two qualities bring him to the attention of Mancom’s chief officer, referred to only as Management (Matt Damon). Management assigns Qohen to the task of solving the “Zero Theorem,” a mysterious formula that has eluded explanation and driven men insane.

Although written by Pat Rushin, The Zero Theorem begins as an aggregate of past Gilliam works. Qohen’s hairlessness recalls Bruce Willis in 12 Monkeys, and the Mancom bureaucracy clearly echoes Brazil. It feels frantic, as though the director is simply churning out what fans expect.

Fortunately, halfway through the film the mood shifts abruptly and becomes much quieter and thoughtful as our hero meets two characters and a more human story emerges. Bainsley (Mélanie Thierry) is a kind of futuristic webcam girl who takes Qohen to a gorgeous cyberspace beach in which the sun is always setting. Bob (Lucas Hedges) is a young computer genius enlisted to keep him on task, takes him to a crowded city park. The film really gels in these two settings. The beach is a marvel of the uncanny valley, looking like something too perfect to be truly convincing, while Qohen and Bob sit in the park framed by an enormous X of signs prohibiting everything from food to dogs to being a person. Beyond the brilliance of their surroundings, this is where Qohen truly emerges as a character.

The Zero Theorem is full of humor. Damon in particular does deadpan marvels with his handful of lines. But it’s also a terribly melancholy film. Although his performance begins with a collection of nervous tics, Waltz slowly peels back the layers of Qohen until we see a profoundly damaged human being. It’s one of his most nuanced roles yet, in a movie that initially appears to be as subtle as a black hole. But The Zero Theorem, like so many of Gilliam’s films, is ultimately about the dangers of hope and imagination. The final scene is one of the most beautiful endings in Gilliam’s career: you can’t help but be heartbroken and happy at the same time.