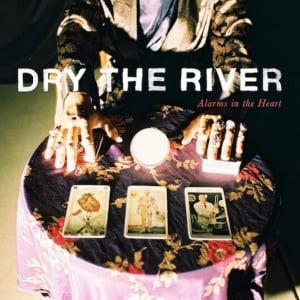 [xrr rating=2.5/5]In the wake of Mumford and Sons’ success, folk groups came out of the woodwork by the flannelled truckloads. The London-based Dry the River were lumped into that folk fever back when they released their debut album Shallow Bed and were never truly given a serious chance to showcase their sound. In all honesty, I myself am guilty of dismissing the band as knock-off Mumfords. And seeing as M&S’s music was ubiquitous at the time, I had no desire to hear it let alone a reasonably close approximation. Two years down the road, Dry the River is back with Alarms in the Heart, an album that leaves virtually all of the fiddling and folk behind to explore new ground with a rock-oriented sound.

The drastic change may have been prompted by the departure of violinist William Harvey. Or perhaps his departure was prompted by a conflict of musical differences. Either way, with him went the folk, and what grew in its place was ramped up rock. That gives Dry the River the benefit of not living in the shadow of more well-known folk bands, but this new direction may not be the blessing they’d hoped for. The band still veers toward the multi-layered hymnal vocals and beautiful harmonies that were on display in Shallow Bed, but that is more often than not drowned out by squelching guitars that rarely complement the tender, sentimental lyrics.

Instantly catchy title track “Alarms in the Heart” opens with a lingering organ and solemn vocal from frontman Peter Liddle. After that subdued intro, the drums and guitars kick in and lead into a very upbeat chorus despite lyrics warning against ignoring signs of disaster and “alarms in the heart.” “Hidden Hand” is energetic from the get-go and has a great rhythm, but the lyrics are a bit repetitive. The imagery itself (a staple in Dry the River’s songwriting) comes across as forced here, with Liddle singing about the loss of innocence in a chorus that begins with “The garden’s overgrown” and references talking snakes. Rounding out the predominantly upbeat first half of the album is “Med School,” a fast-paced but instantly forgettable track that opens with the line “They’re cutting up the bodies in the med school basement / And I am only watching in an academic placement” and goes downhill from there.

There are slower ballads on the album, most notably “Roman Candle” and “Vessel.” Truth is, most tracks start off sounding like ballads and then build to dynamic choruses. But “Roman Candle” sticks to being a low-key melancholy duet. Liddle is accompanied by Emma Pollock, and the two complement each other well. Vessel is stripped down to Liddle’s vocal and high-pitched guitar picking that is later enhanced by swelling violins. It’s a good closer except that honor goes to “Hope Diamond” – a two-for-one finale that is mostly ambient silence.

“Med School” is the first time the new rockier electric guitars are really at the forefront of a track. It opens the floodgates to make way for songs like “It Was Love That Laid Us Low,” “Gethsemane” and “Rollerskate.” The percussion-heavy “Gethsemane” starts off as a fragile song about heartache only to then unleash squelching guitars and crashing cymbals. “Rollerskate” is never wishy-washy about being full-on rock song, but the lyrics are shouted to overcome drums and guitars not to mention being fairly lackluster. “It Was Love That Laid Us Low,” however, is the first track that seems to point to a new distinctive sound for Dry the River. It is slower than most songs on the album but experiments with deep, resounding drums, fuzzy guitars and string arrangements.

“Everlasting Light” – undoubtedly the song that is expected to be the standout – encompasses all of the problems with Alarms in the Heart. A gritty guitar and intermittent synth loop incessantly throughout the entire track. Just because you’ve found a new toy doesn’t mean you should let it overwhelm the rest of your music. Like much of the album, this track features bizarre, meaningless lyrics starting with the opening lines “I was lying on the floor of the playground/ You were chasing off a kid with a greyhound/ I remember thinking you’re the coolest girl I know” while the chorus mindlessly repeats “I had my reasons at the time.” Once Dry the River give in to their proclivity to bombast, they find themselves completely lost mid-track in a cacophony of crashing cymbals, squealing guitars and Liddle’s voice desperate to be heard.

Alarms in the Heart is nowhere near the cohesion of Shallow Bed. Fast rock songs, slow ballads and whatever falls in-between result in a thoroughly disjointed album. And that is a shame, since this sophomore album comes across as a confident effort to reestablish the band’s sound. Dry the River seem to know exactly what they want to incorporate into their sound, but that doesn’t change the fact that Liddle’s voice needs space to exploit the emotional heartache in the lyrics and can’t do so when overwhelmed by this untamed rock aesthetic.