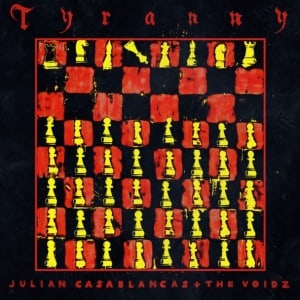 [xrr rating=2.0/5]When Julian Casablancas first set out on his own with Phrazes for the Young, I was actually kind of excited. While it was a modest album, Phrazes had a considerable amount of charm, and it pointed out a new direction for Casablancas to head into, especially when taking into account that the Strokes seemed to be a dead concern at the time. It was clear, concise and it emphasized his strengths as a songwriter. Now, for his second solo album, Casablancas seems to have chucked all of that out of the window. Where Phrazes was a bright, shimmering synth-pop delight, Tyranny is a filthy, noisy, scuzzy mess of an album, the aural representation of his new hobo-chic wardrobe choices. It’s an album committed to a specific idea that makes it suffer, despite being a somewhat cohesive piece.

Of course, Casablancas would be the first to point out that Tyranny isn’t so much a solo album as it is the first album with his new band, The Voidz. As such, it doesn’t connect to his other solo work, nor does it follow much in the vein of The Strokes. The Voidz are certainly a more aggressive band, and that gets to the core of what Tyranny is about. This album is pure, unfiltered aggression as only Julian Casablancas can express it. Beneath walls of squealing guitars, songs like “M.utually A.ssured D.estruction” and “Crunch Punch” blast forward in spurts of barely-contained chaos. If his goal while making Tyranny was to create something shocking and abrasive, he certainly accomplished that.

However, for all of the album’s noise, Tyranny doesn’t really say anything. It’s all screeching and cacophony for its own sake. The album’s centerpiece, the eleven-minute “Human Sadness,” is clearly intended to be his art-rock masterpiece, but it never rises above the haphazard patchwork of underwritten fragments that it actually is. It also doesn’t help that lyrically, Casablancas offers nothing beyond the mumbled non sequiturs that he specializes in. Normally that’s not a problem; any Strokes fan will tell you that he isn’t exactly a poet, but Tyranny offers little of the lyrical cleverness that he does possess. His attitude throughout is po-faced and self-serious, lacking any of the assured swagger that made him compelling. A sense of urgency would be welcome on Tyranny, but Casablancas and his band don’t seem to offer anything other than speed and volume.

Funnily enough, Tyranny works best when the noise dissipates and the band focus on melody. In particular, album closers “Nintendo Blood” and “Off to War” provide a moment of respite from the storm of noise while demonstrating that Casablancas hasn’t lost a step as a songwriter. Of course, they come after an onslaught of dissonance so relentless that anything resembling coherence is bound to be a welcome sound.

Honestly, though, I have to give Casablancas some credit. I don’t know anyone of his stature who would have the guts to make an album as consistently off-putting as Tyranny. In that sense, he’s earned some points for bravery. Still, his bold new experiment just flat-out doesn’t work beyond the initial shock. It certainly doesn’t sound like anything he’s ever done before, but Tyranny doesn’t present an exciting future for his solo career. Instead, it’s more of an oddity, an intermittently interesting curio that’s bound to grow more stale over time.