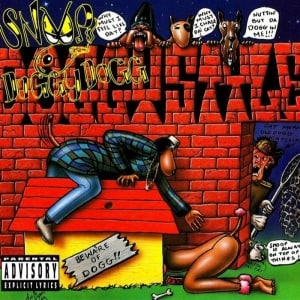 The opening vignette dropped listeners into Snoop’s world, a world that was eye-opening, absurd and amazing. While this was a whole new world for much of America, Snoop had been buzzing for a few years previously. First it was “Deep Cover”, with Snoop slickly spinning stories about set-ups, stick-ups and 187s on police. Snoop of course also appeared on half of the tracks (and all the hits) of Dr. Dre’s seminal The Chronic, officially catapulting the youngin into the stratosphere. So when Snoop was ready to drop his debut, the hype surrounding him was so immense the album debuted atop the Billboard charts. The luxurious baths would have to wait.

Snoop’s smooth, languid flow gets its first real shining moment on “Gin and Juice” – and what an introduction. Behind a light and loopy G-Funk beat, Snoop steps into his verses with a casual confidence. A low-key ying to Dre’s brash yang, Snoop’s drawl is at once cool and catchy. Or as he puts it, “Everything is fine, when you listen to the D-O-G.” In the song, he somehow overcomes “so much drama in the LBC” and still keeps his composure. The chorus is a master class hook-making, giving us not only an indelible image of a young Snoop strolling with a cocktail, but perhaps the best antimetabole since Malcolm X. If one of the album’s central themes is to shine a light into Snoop’s world, it’s an alluring series of images.

But the listener is not just given a look into Snoop’s world; Snoop has created a whole new world for the audience to visit. The first moments of the album drop us into Snoop’s bathroom. The intro to “Tha Shiznit” transport into the broadcast booth of a fictitious radio station, WBALZ, with DJ Sol T. Nuts. All of these serve to create a suspension of disbelief that lets Snoop’s storytelling run wild. Paired with the burgeoning popularity of MTV, it was fast becoming a doggy dogg world.

In addition to the still-hysterical drops and elaborate intros, Snoop also brought along his crew. Following The Chronic, Doggystyle one of America’s first introductions to Kurrupt and Nate Dogg, two figures that would go on to shape the state of hip-hop for decades to follow. They both appear on the ribald “Ain’t No Fun”, a song that manages to be both jumping and juvenile. Snoop gets on the track and all of a sudden it’s a party all over again. Not that this is a surprise at this point. Throughout the album, Snoop is on fire, showcasing not only a perfect, laid-back presence in the pocket, but demonstrating an uncanny ability to arrive at unique vocabulary and wholly original wordplay.

After years of being surrounded by drug dealers, pimps, gang members, hustlers, and inmates, Snoop was infused with an astounding combination of smooth talk and street slang. This will of course be a trademark throughout Snoop’s career – his ability to flip a phrase that earworms into the public lexicon – but the first seeds of these skills flower here. Anyone who has ever heard someone say “fo shizzle” can partly thank Doggystyle’s fourth track, “Tha Shiznit”.

But the whole record isn’t all fun and games. As pursuant to gangsta rap, there is violence and turf-stepping abound. Snoop gets gun down by rival gang members in the opening 30 seconds of “Murder Was the Case”. As he lying on the ground and he feels his body temperature fall, he contemplates who will raise his baby before being awoken by a sinister-sounding demon. Snoop makes a deal with the devil, in a Faustian bargain that echoes the real-life travails of Snoop’s relationship with Death Row honcho Suge Knight.

Further complicating the matter, in 1994 Snoop was also charged with murder. This fueled a fire of public outcry, calls for censorship, and even government intervention. When presidential candidate Dan Quayle talked about the scourge of gangsta rap and its vices, he pointed to Snoop and Death Row. Snoop was later acquitted.

Although violence pops up on the record, it is rightfully not the album’s ultimate legacy. The record’s impact lasts far beyond that. It is still Snoop’s best-selling and best-charting album. Snoop’s melodic rapping style, so familiar now, has imitators up and down the charts. Snoop’s knack of flipping a phrase into a hook is essentially the crux of today’s viral hip-hop landscape. He was one of the first artists to fashion hip-hop into the pop lane, making it more accessible and expanding hip-hop’s reach across the country. Taken in tandem with The Chronic, the record is high water mark for early ‘90s West Coast hip-hop, which in some eyes is the high point of hip-hop in general. Safe to say, Doggystyle is the shiznit.