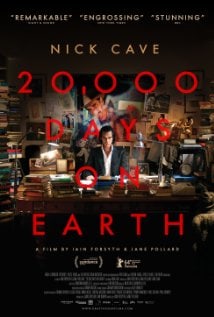 [xrr rating=3.75/5]Nick Cave is the rare artist whose popularity has grown even as he reaches the final act of his career. While many of his peers only release an album every four years or simply cannot capture the vitality of their early work, Cave continues to work relentlessly, producing soundtracks, novels, screenplays and consistently strong records with his outfit the Bad Seeds. Though Cave has always possessed a rabid, yet cult, following, this year he completed a summer tour playing large US venues and even recently appeared in a magazine as mainstream as Entertainment Weekly. It makes sense that Cave would eventually be the subject of a rock documentary. Luckily, 20,000 Days on Earth, directed by the singer’s friends Iain Forsyth and Jane Pollard, maintains the high artistic level that Cave puts into his work.

A ruminative if somewhat disjointed look at the singer and his life circa 2013, 20,000 Days on Earth finds Cave living happily in Brighton, England, content in both his professional and personal existences. A longtime heroin addict, Cave has settled into his 50s by kicking the habit, working ceaselessly and enjoying the company of his wife and kids. He has a healthy creative partnership with fellow Bad Seed Warren Ellis. So what else is there to do? 20,000 Days on Earth finds the singer taking stock on his life, whether it be sorting through his archives or examining his role as a performer and an artist.

The film is shot as a possible day in the singer’s life, one that features routine and visits with friends, family and collaborators, interspersed with concert and rehearsal footage of songs from Cave’s latest record, Push the Sky Away. This is not a standard rock doc that features talking heads and interviews with its subject. Co-written with Cave, Forsyth and Pollard infuse the film with voiceover narration from the singer as we drive with him through his adopted city and along the coast.

The best scenes come when Cave visits a therapist and talks about his father and his first sexual experience. Honestly, I could have watched a full film of Cave in therapy. In these scenes, he comes off as vulnerable and honest, especially when talking about his father, who died when Cave was 19. Less successful are the cameos from Ray Winstone, Kylie Minogue and ex-Bad Seed Blixa Bargeld. Billed as the first time Cave and Bargeld have met since the guitarist left the band about 10 years ago, the reunion is brief and lacking in any revelation or tension.

If you are a fan of Nick Cave, 20,000 Days on Earth doesn’t really offer any new insights into the private life of the artist. Even when he talks about the first time he saw his wife, model Susie Bick, Cave fans will recognize the exact description from prior interviews. And it makes sense. Cave may have entered a more open, even cuddly phase of his career, but still doesn’t mean he isn’t protective of his image. We never hear anything about his two older sons (born a week or so apart from two different mothers) or anything about why longtime collaborator Mick Harvey left the band a few years ago. However, it is touching to see Cave look at photos of himself when he was young and reckless and marvel at the life he used to live.

20,000 Days on Earth is best in the moments where we see Cave interact with others. He and Ellis recall an encounter with Nina Simone where the singer seemed completely contemptuous of her audience and yet gave a defining performance. Cave recently said he wants to terrify and dominate his audience, but I’m sure that’s entirely true. I’ve seen the man live 12 times now and his recent shows have felt inclusive and even warm, a far cry from the vicious performances he once gave with the Birthday Party. 20,000 Days on Earth ends on a touching note as Pollard and Forsyth feature a recent performance of “Jubilee Street,” cutting in old footage of Cave in concert as a younger man as he shouts, “I’m transforming. I’m vibrating. Look at me now!” This is the closest we will get to the “real Nick Cave,” those moments when he’s on the stage, lost in the fury and tenderness of his music. No film can capture that, but 20,000 Days on Earth knows better than to try.