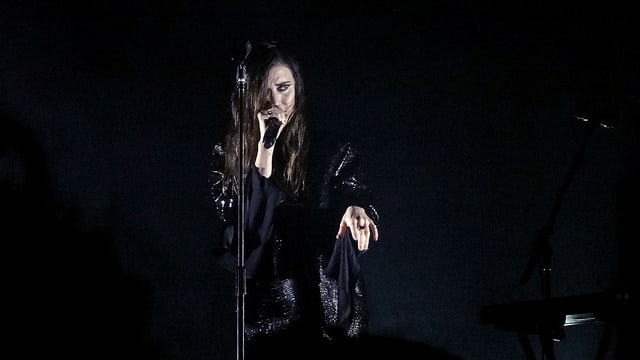 Heartbreak is the primary catalyst for many artists, a crushing force out of which some of the world’s greatest artistic achievements have sprung. Nick Cave recognizes its importance, claiming that entire worlds have come from sorrow, great wonders willed from longing. For Lykke Li, a cataclysmic breakup spurred the creation of I Never Learn, her third, and best album so far. For Li, that pain pushed her creatively, and on a warm Portland night in the dying days of summer, the Swedish singer came to town to share her songs of heartache.

Li and her band played a short set that concentrated mainly on newer tracks, dropping in older pop tunes like the cocky “Get Some” and “Youth Knows No Pain.” The juxtaposition of songs from I Never Learn against her bubblier back catalog highlighted Li’s growth as an artist. Although the crowd cheered louder for the upbeat tunes, melancholy held sway.

On record, Li’s husky voice possesses an air of mystery. She sounds as if she could be as young as Miley Cyrus or as old as Marianne Faithfull. In concert, you can tell that Li is trying for mysterious. However, there is something awkward and calculated about her. Her stage banter seemed off the mark and canned, her choice in flowing garments a little too Stevie Nicks. While her songwriting chops are up there with both Natasha Khan from Bat for Lashes and Zola Jesus, Li can’t pull off the air of mystery those other two women possess.

Though Li and her band put on a very good show, something felt like it was missing. The emotional crescendos that hit so hard on record just didn’t ring true. The band dutifully powered through the songs, but I didn’t feel the angst and heartbreak so evident on the raw album. Li talked about sadness and being alone between songs, but I didn’t buy it.

Portland’s Crystal Ballroom is a good room if you’re looking to dance. New songs such as “Gunshot” and “Just Like a Dream” can lend themselves to swaying, but I suppose Li left out “Love Me Like I’m Not Made of Stone,” I Never Learn’s most stripped down and emotionally bare song, because everyone was standing up.

After a one-song encore, Li called it quits, the clock barely dripping past 11pm. During her set, songs from an ‘80s dance party in the bar below threatened to overtake the quiet moments. Li never said a word about the interfering noise. I would have been livid. I understand why an acoustic song would feel horribly out of place that evening.