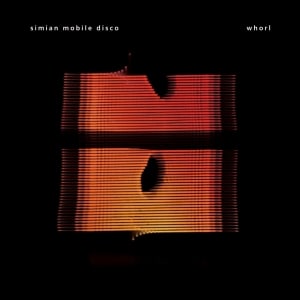 [xrr rating=3.5/5]When James Ford and Jas Shaw broke away from the four-piece Simian indie-electro outfit back in 2005, it is highly doubtful either ever new just how mobile the project would become. Sharing an appreciation for the club sounds of electro and techno, the pair found success during the latter part of last decade by spreading their decadent blog-house vibes. Since transforming hipsters to tech-heads, the duo have toured the project the world over, from the darkest of underground clubs to celebrated festival stages. Once again finding too much comfort in their projects, Ford and Shaw sought something more from the recording process. So for Whorl, SMD left the laptops at home and headed out toward famous psychedelic-mecca Joshua Tree to compose, record and perform the new 12-track offering.

Now seven years removed from their vocal-heavy debut LP Attach Decay Sustain Release, the focus is 100% on the instrumentals. Recording the vast majority of Whorl during the album’s debut performance April 26, 2014 at Pappy & Harriet’s, a saloon in Pioneertown, CA (they also utilized some rehearsal takes and a proper mix-down session before mastering the album) there was no time to bring in the array of guests that fans had grown to expect from earlier albums. As a result, all attentions are forced to focus on their minimal arrangements, each analog bleep and tempo shift naked for the world to criticize; no hiding prolonged melodies and feeble transitions beneath the talents of their esteemed guests.

This approach isn’t totally unfamiliar. 2012’s Unpatterns served as practice for the sessions that led to Whorl. Unlike the humor and immediacy employed during 2009’s Temporary Pleasures and 2010’s Delicacies, there is a new rush to test their own abilities free of hardware/software crutches. Akin to aboriginal tests of manhood, the environment made a profound effect on the release. Just as Moby’s Destroyed was the product of spending hours in airports and quiet downtowns at 5 a.m., Whorl arrives from the expansiveness and desolation of the California desert.

The beginning tracks arrive like a ghost from the abyss, the cavernous echoes and sci-fi mystique of “Redshift”, distant church bells of “Dandelion Spheres” and anxious march during “Sun Dogs” each highlighting the uneasiness that arrives when experimenting with the soul of one’s own project. When one escapes the electronic quicksand that barely keeps “Hypnick Jerk” buoyant, you arrive at the full-rave mode of “Dervish”. One can detect that Ford and Shaw themselves were peaking as they hammered away to incite a storm of activity across Pioneertown.

There lies the challenge with Whorl. While the two can edit the bouncy “Calyx” and extend the interplay within “Jam Side Up” while touring in support of this album, infusing forthcoming live sets with the bleakness of “Calyx” or “Z Space” seems nearly impossible — unless they simply want to take the stage on the waves generated from the latter. A product of the desert, can the album ever seem whole outside of that setting? That is a question that Ford and Shaw seem to want us to avoid and just enjoy the experience.