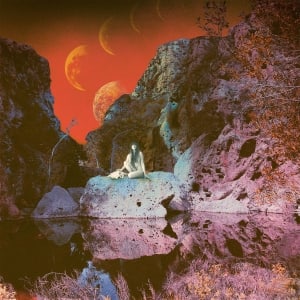 [xrr rating=4.0/5]Opening up to mammoth, chugging guitar chords, it’s immediately obvious that Primitive and Deadly will be a tremendously heavy record. More than that, Earth’s eighth studio album comes as close to the band’s drone-metal origins as it has in years, returning to the booming minimalism Earth hasn’t directly explored since founder Dylan Carlson reformed the band in 2005. Hex: Or Printing in the Infernal Method, The Bees Made Honey in the Lion’s Skull and the recent two-part set Angels of Darkness, Demons of Light intersected contemporary post-rock with their sun-blasted renderings of bleak Americana instrumentals, so the thundering repetition on Primitive and Deadly is both a surprising expansion of that sonic pattern and easily linked to Carlson’s famed (and famously heavy) ’90s work.

His compositions continue to make Earth one of the most skillful instrumental bands working, but Primitive and Deadly benefits immensely from the sparse vocal contributions provided by Rabia Shaheen Qazi (Rose Windows) and an expectedly complementary Mark Lanegan. While Lanegan’s bruised baritone comfortably suits the dark omens of “There is a Serpent Coming” and the weary meditations of “Rooks Across the Gates,” Qazi’s haggard siren-call defines lengthy centerpiece “From the Zodiacal Light,” elevating Carlson’s expert doom-psych-drone hybrid to one of Earth’s best recordings. The song’s minimalism and plodding gait allow her plenty of room to soar over buzzing guitar and cultivated feedback, her vocals a natural pairing to the churning abyss of Earth’s tense exploratory vamp. Both Qazi and Lanegan match the tone of Earth’s searching momentum with equally methodical delivery, apocalyptic messaging and lyrical brevity the vocal equivalent of Earth’s unwavering guitar riffs.

Carlson continues to prove himself a master of compositional restraint, unfurling hypnotic guitar patterns that evolve with the most minor of variations as they crawl forward to the patient rhythm of (longtime collaborator) Adrienne Davis’ equally restrained percussion. Bill Herzog’s bass provides the chugging heartbeat of opener “Torn by the Fox of the Crescent Moon”, a unwavering and relentless companion to the song’s distorted guitar, while guitarists Brett Netson (Built to Spill) and Jodie Cox weave stoic lines in between Carlson’s. Carlson’s playing is not only minimal, but also patient, each arid riff resonating fully before he circles back to crash into the melody again. Later on instrumental “Even Hell Has Its Heroes,” he gets to immediately launch into what could be called a traditionally metal guitar solo in Earth’s musical vernacular, but waits until the song’s conclusion before veering significantly from Netson’s small changes of vector. Carlson’s is the kind of astoundingly confident shredding that doesn’t require theatrics to make a dramatic impact.

While Earth’s last few records explored exquisitely varied folk and blues sounds by utilizing cellos and keys, Primitive and Deadly bridges the gap between that contemporary reboot and the heavy volume that has always seemed to inform Earth’s work. Carlson’s direction is what bonds those sounds together, his willingness and ability to explore a specific melody tirelessly the common link between all of Earth’s albums, and the great triumph of this latest release’s glacial doom.