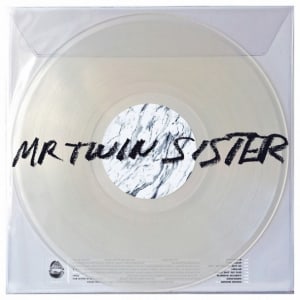 [xrr rating=4.0/5]What’s in a name change, anyway? These Long Island electropop upstarts might have gone from “Twin Sister” (trendy, catchy, vaguely uncanny) to “Mr Twin Sister” (silly, WTF), but all it’s really done was widen the gap between the band they were poised to become and the band they grew up to be instead. Twin Sister basically had the post-chillwave zeitgeist on lock before it was even fully articulated, folding potentially kitschy sounds of disco, funk, synthpop, new age and new wave into a hyper-current, pastel-hued 4AD-ripping dream-pop steeped in R&B inflections and lounge-jazz affectations. Hearing their calling card single, 2010’s “All Around And Away We Go,” in 2014, is an instant nostalgia trip, and not just because the song was everywhere that year: in “All Around,” one really hears much of the next four years in nascent form. But, as with Usher’s “Climax” two years later, that embryonic stage was already much deeper, more complex, and more willfully bizarre than much of the music it directly or indirectly inspired. Unlike “Climax,” however, there was a lot more where “All Around” came from. Mr Twin Sister’s body of work to date is much more modest than the hype they once attracted, but it’s a rich, vibrant, fascinating discography that follows, at a lackadaisical pace, a single cohesive aesthetic trajectory.

It’s not a self-contained trajectory. Mr Twin Sister certainly don’t exist in a vacuum, as anyone who’s listened to them back-to-back with Stereolab can attest. This hasn’t necessarily been a case of a band tapping into the sound and mood of a particular time by simple coincidence; from Vampires and Dreaming Kids onward, Mr Twin Sister probably couldn’t have existed in any other decade, and while they’ve been quietly dedicated to their own distinct, sophisticated sonic identity for years now, they’ve also been paying attention to what’s going on around them. The band is happy to take advantage of new ideas, techniques and styles – as long as they help draw out and develop those qualities that make Mr Twin Sister so unique. The pitched-down vocals that ghost every one of Andrea Estella’s lines on second Mr Twin Sister single “In The House Of Yes” are more intrinsic to right now than they were even in the post-Silent Shout/Untrue years, but “In The House Of Yes” doesn’t sound like a song that’s particularly gunning for wide listenership. If Mr Twin Sister were ever almost-famous, it’s because at the end of the last decade there was an unprecedented cultural appetite for patient, hazy pop music. That time is quite bygone – how fast these things shift – but Mr Twin Sister still move at their own speed. Regardless of what the band members themselves say, it’s also possible to read the name change as a fairly natural progression: they were always destined to end up this odd. No wonder they self-titled the new record.

The big shift from their debut LP, 2011’s wonderful In Heaven, is that Mr Twin Sister are much further away from an idea of guitar-based indie rock than Twin Sister were (but then, so is the general conception of “indie rock”; once again, Mr Twin Sister seem to either be obliviously in tune with the times or secretly orchestrating them). Mr Twin Sister dives deep into various dance musics, especially disco and house: check the string glissandos, wailing sax, and heavy panting of “In The House Of Yes” or Estella’s gleefully diva-fied pose-striking (“What ever happened…I don’t want to leave, no one wants to leave, funny how things have to end”) on the outro to the stunning robotic strutter “Out of the Dark.” It’s a record staged in a faded or imagined NYC gay-club underworld – “Walking to the billiards, alone in drag/ I was on 112, no ID in my bag” (“12 Angels”); “I am a woman, but inside I’m a man, and I want to be as gay as I can” (“Out Of The Dark”); a song called “Rude Boy” (self-explanatory).

But it would be easy to privilege the record’s pop-cultural aspirations and to paint it as something other than what it is, never recognizing how much more omnivorous and generous the band’s aesthetic imagination skews. That is, after all, what happened with their earlier work. In reality, Mr Twin Sister have made something far more nuanced, more layered, and more elusive than a decade-scale #tbt. “12 Angels” has a throbbing, clubby pulse to go with its lyrics, but the song manages – like “All Around” before it – to both indulge that drive and to turn away from it; the atonal sax squall in the background and the cut-up clips of jazzy piano that never get stirred up by the beat are as indicative of its ultimate effect as anything else in the song. Likewise, the velvety saxophone and lilting finger-picking of instrumental interlude “Medford” and the melancholic acoustic strummer “Crime Scene” are as representative of Mr Twin Sister as the irresistibly funky bassline of “Rude Boy” – which again, is the animating element of what could have been a much more drifting kind of ambient pop song.

Every build is tempered; every wash is electrified. The members of the band sometimes become lost inside their own labyrinthine sonic architecture, in a good way: there are songs here that initially read like dance-pop, only one gets distracted and suddenly the drum track has turned a corner and is nowhere to be found. Mr Twin Sister can be tremendously touching, too – the Julee Cruise-esque lounge-pop of “Blush” brings a crushing note to the nocturnal theme with Estella’s wrenchingly-sung twist, “Is there even a real me, or am I just a series of nights?” But then it’s straight into the wily thrusting of “Out of the Dark.” To answer the question, sort of, there’s almost certainly a real Mr Twin Sister somewhere (everywhere?) in this self-titled record. The assuredly fruitless attempt to catch up with this always clever, nimble group is the fun of it.