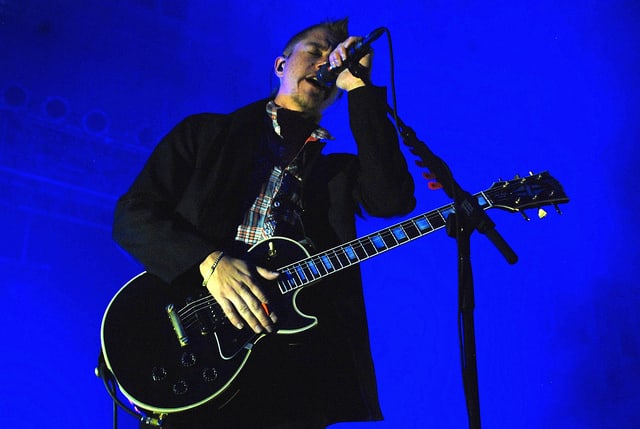 Interpol’s star may be waning, but you would never know from their recent set at Pomona, California’s Fox Theater. After closing the evening set with “Slow Hands” and an encore of “Stella Was a Diver and She Was Always Down,” the worst critiques leveled against their later work seem foolish.

Mexican alt-rockers Rey Pila prepped the stage for the Brooklyn post-punk saviors. Given the darkness of the headliner, the band’s enthusiasm brought a welcome degree of levity to get us ready for our eventual descent into sorrow. Front man Diego Solórzano wore a floral shirt, and gestured at the crowd for more participation. He sounded like Peter Murphy on antidepressants. Solórzano’s casual hamminess didn’t detract from their music or his own stage presence. His bandmates played even their most heavy moments as if they had to keep an entire discotheque dancing. If Interpol strikes some cynical music critics as a band on their way out, Rey Pila is on the rise.

Paul Banks and company took the stage with “My Blue Supreme,” a track off their new record El Pintor. A deep cut from your new record isn’t the most crowd-pleasing introduction, but the band’s devoted fan base trucked through it, knowing more lasting rewards were imminent. Interpol read the crowd well and followed with two of their most potent and well-known bangers, “Say Hello to the Angels” and “Evil,” which is their most popular track on Spotify. By the time they played another new track, “My Desire,” the crowd was alive and well, eager to eat whatever they put on the table.

The problem with Interpol shows is similar to the problem with their discography. The audience was ecstatic whenever the band played anything off their first two records, Turn on the Bright Lights and Antics, but seemed uninterested in almost anything else. The band precisely executed old cuts like “The Lighthouse” (off Our Love to Admire) and “Lights,” (from their self-titled album), but the audience merely put up with them. Still, it’s encouraging to see material from El Pintor garner more enthusiasm live, as the album has not been as well received. The applause following its leadoff single, “All the Rage Back Home,” was as loud as that following their slow-paced classic “NYC.”

Interpol’s place in the music world seems precarious, a stumbling tightrope walk that leaves fans worried they may fall for good. But this week at the Fox, they proved yet again that they’re old pros and that fans don’t have to worry about them. Even in the course of their set, there were moments where they almost fell off their high wire. But it’s easy to forgive when they still can do backflips and land perfectly balanced as well.