January 27, 2021
Home Books Introduction to a True History of Cinema and Television: by Jean-Luc Godard 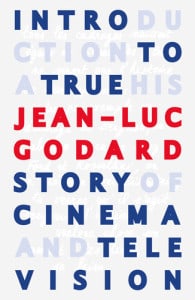 [xrr rating=4.5/5]Everything seems to be coming up Jean-Luc this year. Following decades of critical and public neglect (if not outright hostility), Godard premiered his 3D tour-de-force Goodbye to Language at Cannes to rapturous reviews and the Jury Prize, his first award at the festival. Michael Pitt’s essential Cinema Historian, a dedicated breakdown of the director’s immense Histoire(s) du Cinéma project, was also released and deserved instant placement on a cinephile’s bookshelf. And now there’s this, a belated English translation of Godard’s ‘78 lectures at Montreal’s Conservatory of Cinematographic Art, long out of print even in French and a crucial insight into the development of Godard’s critical practice that would ultimately result in Histoire(s).

If Introduction to a True History of Cinema and Television arrives on the heels of a sudden reconsideration of the director, its own self-examination is fitting. Since his incendiary break from commercial filmmaking with 1967’s Week-End, Godard has been an artist resolutely uninterested in repeating himself, looking back only so he can move forward at the most unpredictable angle. For these talks, however, Godard screened many of his classic ‘60s films, in many cases seeing them for the first time since he finished production on them. As such, the talks he gives in relation to these movies, discussing his mindset at the time and how he views them now, are invaluable resources, revealing documents from a man who remains cinema’s most provocative critic, even, and especially, since becoming a filmmaker himself.

Moderated by Conservatory founder Serge Losique, the lectures give an insight into the increasingly jumbled, intuitive thought process that would define Godard’s filmmaking apparatus. Asked relatively straightforward questions about why he made such-and-such film, Godard will start to answer, then immediately sidetrack himself, speaking almost as a split personality between his younger, brasher self and the older, more analytical filmmaker who cannot help but be abashed by elements of his youth, from the ideological contradictions, even reactionary quality of Le Petit Soldat or the sexism of Breathless (among other films). You get the sense that Godard could have staged a debate against only himself, constantly stopping an explanation of what he thought then to point out why he would never consider it now.

Godard even changes up the lecture formats on the spot, and the first few talks show a rapid evolution in approach from screening an old film in relation to one of Godard’s to a more cut-up process that pulls clips from several films and fashions impromptu mini-lessons in cinema history, more free-associative and esoteric than truly historical. The director also leaps at the chance to go off on punning tangents, toying with the lingual similarities between “imprimer” (to impress) and “s’exprimer” (to express oneself) and then drawing out an entire philosophical point about how to approach filmmaking with these two words as conceptual polarities. In the middle of giving old friend François Truffaut a thorough thrashing, he responds to Losique’s mild defense of Truffaut as a “marshal” of French cinema by spontaneously comparing Truffaut to Marshal Pétain, head of France’s collaborating Vichy regime. There are also less flattering contradictions and ideas, as when, discussing Vivre Sa Vie, Godard criticizes the sexism embedded in the very way we talk about films and then goes on to compare his marriage to Anna Karina with her character in the film, dubbing himself the customer and her the prostitute.

The audience, as ever in Q&A sessions, can most gently be described as “hit or miss,” and it’s no surprise that Godard’s more challenging films prompt better questions. A married woman gets up to object to A Married Woman as being conceptual rather than realistic, and even borderline pornographic, criticisms Godard accepts even as he defends himself by addressing them, arguing that the film’s pornographic fixation on its female protagonist was a deliberate method for social criticism. And the discussion for 2 or 3 Things I Know About Her, the precursor to Godard’s headier late-period, is perhaps the best extended analysis and criticism that film has ever received, with Godard clearly more fond of it than his more flippant genre deconstructions and accordingly more verbose about it. Even his own knocks against the film are contemplative, and as Godard complains about the film being too wordy in trying to articulate its ambitious ideas, it’s not hard to draw a line 36 years into the future to his latest feature.

There are intriguing precursors to Godard’s subsequent career throughout the book. Already versed with video, the director mulls over the notion of, in the future, avoiding screenwriting altogether, instead using video to create a kind of visual script for filmmaking because of its closer relation to the actual act of making a movie. This prefigures Godard’s habit of releasing video companions to his ‘80s films, and the increasing confidence with which he maps out the screening format for the lectures (not to mention the frustrations he encounters in finding, then clearing copyright for film prints) forecasts some of the critical and rhetorical foundations of Histoire(s) du Cinéma. Though scatterbrained and diversionary, the lectures presented in this book are likely the most open, accessible and playful Godard texts to be translated into English, and they are as essential a work of criticism of Godard’s early work as any monograph written about the director. If you have even the faintest interest in the filmmaker, this is an indispensable addition to your collection.