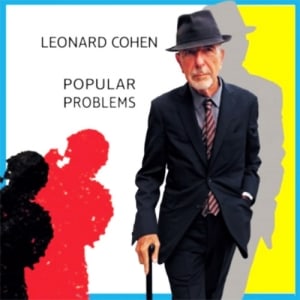 [xrr rating=3.75/5]What do we expect of Leonard Cohen? At this point, the man has done enough for half a dozen legendary careers, and by any reasonable gauge he could hang up his fedora for good. It is public knowledge that he already did this and was primarily lured back into the music world from his Los Angeles Zen monastery (a weird sentence if there ever was one) by a series of unfortunate financial setbacks. Still, that was back in the early 2000s, when he was a spry young 60-something. Popular Problems is his fourth studio album since 2001, which is a pretty decent rate of production for anyone. But there’s that problem: what do we expect from a new Leonard Cohen album?

Cohen established a lyrical and thematic sensibility in the 1960s that’s rarely wavered, but his musical tactics have ranged far and wide. In part, this can be attributed to his selection of co-authors over the years, including Phil Spector, Anjani Thomas and Sharon Robinson. Of all his qualities, Cohen may be least praised for his ability to seamlessly integrate his famous voice with a variety of musical approaches; he’s a consummate collaborator, able to retain identity in the music regardless of the style. On Popular Problems, his primary partner is Patrick Leonard, a career songwriter and producer most known for working with Madonna through her seminal 1986-1998 run. Given that Leonard is something of a chameleon himself, Popular Problems runs the danger of being without a central musical anchor. But fortunately, Cohen mostly manages to lift up the material with his words and vocal delivery.

In fact, Popular Problems features some of Cohen’s most passionate vocals in years. “Did I Ever Love You” has the singer in a barking, near-violent mode that’s reminiscent of Tom Waits, until the minimal accompaniment is broken by female vocalists and an up-tempo guitar part that recalls Cohen’s country music roots. “Almost Like the Blues” shows Cohen spitting out a litany of atrocities starting with “I saw some people starving/ There was murder, there was rape/ Their villages were burning/ They were trying to escape,” before drolly counteracting with “There’s torture and there’s killing/ And there’s all my bad reviews.” If nothing else, he’s not lost his touch with gallows humor. Self-deprecation is a constant through the album, particularly in the opening track, “Slow”: “It’s not because I’m old/ It’s not because I’m dead/ I always liked it slow/ That’s what my momma said.” There is no other singer-songwriter in the world who has aged with as much grace and humor, which has become nearly as much of a lyrical touchstone as sex or the Bible.

There’s a slickness to Popular Problems that improves on the relative dryness of 2012’s Old Ideas, no doubt due to Leonard’s hard work (he produces and co-writes seven of nine tracks here, as opposed to a previous four). While it’s not the seductive plastic shimmer of I’m Your Man (1988), much of the album has a slinky, slightly oily groove akin to Steely Dan in the ‘70s, all slow bassline and keyboards. While it’s not the most exciting change in direction Cohen has made in his career, it is a significantly stronger batch of songs than he’s showcased in some time. He’s not changed his obsessions or his fondness for female background vocals or his weird pop sense, he’s just moved the words around a little. In the end, maybe that’s as much as we can expect from him.