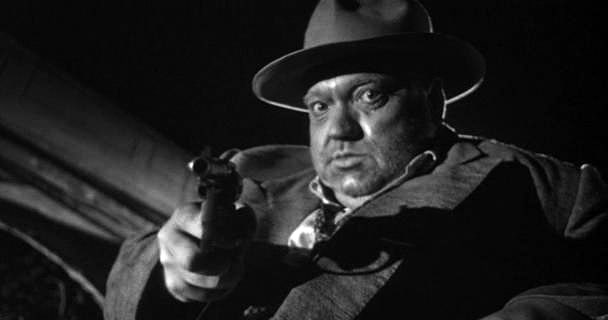 “Mike, do you realize, this is the very first time we’ve been together in my country?”

“Do you realize I haven’t kissed you in over an hour?”

This seemingly trivial exchange cues an explosion that ends a tracking shot that many consider one of the greatest opening shots in cinema. It’s dialogue that doesn’t showily announce its importance, but these lines demonstrate one of the key themes of Orson Welles’ last Hollywood film: the difficulty of crossing borders, both geographically and emotionally. Touch of Evil is on the surface a crime drama about police corruption and moral turpitude. What the viewer may forget is that it takes place during what is supposed to be a honeymoon.

Touch of Evil opens with a ticking bomb. We follow the device as it crosses the border in the back of a car, followed by, on foot, newly married Susan (Janet Leigh) and Miguel Vargas (Charlton Heston) walking from Mexico to California, crossing a border checkpoint. This opening sequence, accomplished in a single shot that runs over three minutes, establishes the film’s main themes, primary characters and locations, and efficiently suggests the tensions that run throughout them all. What it doesn’t show is the film’s villain and immoral center: Police Captain Hank Quinlan (Orson Welles). 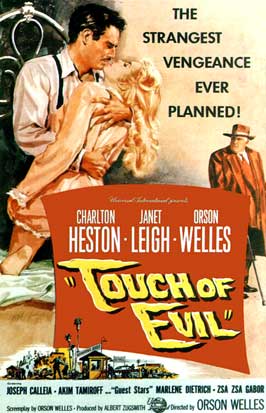 In the late 50s Welles was in Hollywood ready to work within the system and take advantage of studio technicians who could translate his cinematic vision to film. Touch of Evil is one of Welles’ most entertaining movies, and probably his sleaziest. It was also a technical tour de force, with pioneering use of handheld camerawork, one of the first camera setups mounted to a moving car, and last but not least the film’s celebrated opening tracking shot. But this visual razzle-dazzle was not just empty show. Welles favored directors like Ford and Renoir who didn’t show their directorial hand. Welles seemed to always show his, with skewed angles and Russell Metty’s wide-angle deep focus, but he used technology to create meaning, the tracking opening shot all about crossing borders and building tension.

This is a tale of crime and explosion and also of domestic turmoil. Vargas is a Mexican drug enforcement agent on vacation with his new bride, but when an explosion rocks their tenuous equilibrium, his priorities quickly turn from kisses to crime, which leads him away from his wife and leads his wife directly into danger.

Welles set up a second, less celebrated long take in the film, in an interior scene when police find planted evidence in a suspect’s apartment. This parallels the opening shot, which shoved danger in your face, whereas in this second sequence it’s what you don’t see that’s troubling: the workings of a corrupt police captain.

Vargas, in pursuit of truth, chases down a new case and in the process leaves his wife vulnerable to danger and interference. He gets at the truth (and ironically, so does the corrupt captain), but at what cost? This is the plot of Touch of Evil, but this is also the case of Orson Welles, who time and again left the scene of the crime—be it Magnificent Ambersons or Touch of Evil – and left his film vulnerable to studio interference that all but ruined his movie. Welles re-wrote the Evil’s original script in five days and turned in a rough cut on time, but moved on to the next project (Don Quixote, one of his great lost projects), and Universal reshot and reedited, gutting Welles’ film by nearly half an hour and printing the film’s title credits on top of that bravura opening tracking shot. The director wrote a 58-page memo to the studio explaining in reasoned detail the changes he felt should be made, which ranged from simply dubbing lines of dialogue, to shot rhythm, to musical cues, to leaving that opening shot intact. In 1998, the film was reedited to take into account that 58-page memo, leaving us with something that approaches what the director intended.

By the end of the ’50s Welles had yet to take on the Falstaffian proportions that most people remember him by. The future candy-bar glutton’s girth was achieved with padding. Like that mischievous story-teller who he would also play to perfection, Hank Quinlan is prone to lying. But Quinlan creates fiction in the name of justice in much the way that Welles uses cinematic tricks to make the truth of art. He plants a nearly flawless company of character actors in a black and white border landscape that sizzles with vice. The final set piece, with dialogue fading in and out of electronic distortion, is a metaphor for the distortion of reality and the difficulty of recording truth with a machine: the hard life of making art.