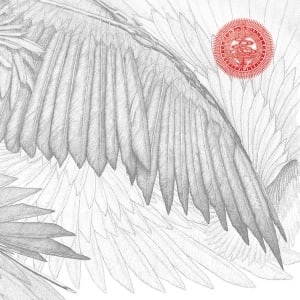 [xrr rating=4.25/5]Kevin Martin has been making music under various guises for two decades, but it was London Zoo, his 2008 effort under his moniker The Bug, that broke him. It was an exceedingly nasty, even apocalyptic collection of ragga and grime, filled with such rumbling low-end that it was tagged as dubstep even as it shared more with true dub than its increasingly maximal electronic successor. Released with sadly perfect timing to coincide with the global economic crisis, London Zoo played like the soundtrack to a collapse, a nightmarish vision of reactive bass music. But the first half of Martin’s belated Bug follow-up, Angels & Devils, may be even more shocking for how unlike its predecessor it is.

As the title hints, the album’s 12 cuts are split down the middle between lighter, ambient tracks and the hellish bangers for which most casual fans know The Bug. Grouper’s Liz Harris helps Martin usher in the LP with “Void,” matching his hissing, airy production with ethereal vocals that provide only the hint of something legible being sung. Beats eventually enter into the composition, but they sound as if they’re coming from over the horizon, with the rubbery spring of one bass line slightly gaining decibels as if it echoed down a canyon passage toward the rest of the track. Things come into sharper focus on “Fall,” with clearer vocals from Copeland and old-school programming that makes the low-end sound like the plodding, analog foundation of a John Carpenter score.

Still a gentle song, “Fall” nonetheless introduces a sense of menace that the rest of the first half develops. The instrumental “Ascension” and the Miss Red-guesting “Mi Lost” edge right up to the usual Bug energy, but instead of stressing anger, the tracks emphasize the feeling of being set adrift in the wake of London Zoo’s topical outrage, of righteous fury giving way to indignation giving way to defeatism. “Save Me” nominally resolves this anomie, but its cooing ooh-oohs and Gonjasufi’s blissed-out lyric readings sound as if some measure of comfort has been attained, if only by illicit means. It’s the sonic equivalent of the last shot of Sergio Leone’s Once Upon a Time in America, a freeze-frame on an individual mentally checking out from his own trauma.

Perhaps the second half of the album is what kicks around this person’s head as he lolls in a drugged haze, dredging up an anger outwardly masked by confusion and surrender. London Zoo MVP Flowdan furiously propels “The One,” an instant upheaval of the trance of the “Angels” portion of the disc. This forces Martin to jump from first gear to sixth, dragging out trebly klaxons, frantic drum patterns, even some orchestral low-end. Flowdan also performs on “Fat Mac” and “Dirty” (the latter taken from last year’s vicious Filthy EP), and his bottomless baritone intonations bridge disparate compositions, yoking the former’s spacious bursts of heavy metal and the latter’s jittering patterns to his demonic yawp. Warrior Queen makes “Fuck You” every bit as forthright as the song’s title, and the start-stop production clarifies that, for Martin, a drop may be a moment of silence as much as a sudden amplification. Only “Fuck a Bitch,” featuring Death Grips, fails to launch, its overly busy beats, speedy delivery and dull lyrics nothing more than an empty posture.

Angels & Devils truly rewards dedicated listening. This review is coming in well after the album’s release, but the delay allowed me to spend more time with the record after initially being mildly disappointed with the disparity of its aural schism. Gradually, its too-loose first half became clearer, and its dreamy departure revealed some of its bite. The gripping second half improves as well, not simply a perpetuation of London Zoo’s great sound but a development of it. London Zoo was a terrifying snapshot of its moment, and so too is this LP. It’s just that, as with the current state of social affairs, it takes a second to realize that things have changed only in how the same core issues are dressed up differently. Martin has expanded his sound in the six years between Bug full-lengths, and the album is a reflection of how much more he can bring to this project now, as well as how easily he can slip back into The Bug’s unique, spiky personality.