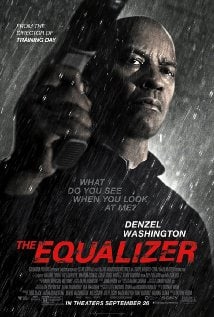 [xrr rating=1.75/5]It’s impossible not to think of the late Tony Scott’s Man on Fire while watching the latest Denzel Washington feature, The Equalizer. Even director Antoine Fuqua tips his hat to the film, employing some Scottian transitions like a time-lapse that advances from day to night, or a cut-up assembly of helicopter shots for padding. That’s about the extent to which Fuqua can credibly ape Scott, however, and the rest of the film is filled with clumsy attempts at putting forward a style: blurry slo-mo meant to visualize the protagonist’s cat-like reflexes, pendulous Steadicam shots that swoop from a random object to a banal close-up of Denzel. As for the film’s many action scenes, the frenzy of Scott’s almost experimentally frantic assembly is replaced by typically weak structure, filled with cuts that are at once simple and incomprehensible.

What the film really retains from Man on Fire are the basics of an overdone plot, that of Washington as some kind of retired übermensch who finds himself tearing through bad guys when an impressionable white girl suffers harm. In this case, it’s Alina (Chloë Grace Moretz), a teenage prostitute in the grip of the Russian mob, who inspires Washington’s Bob McCall to put down his charming collection of canonical literary classics and open up a few throats. So, if nothing else, this film avoids most of the worrisome racial politics of Scott’s picture, but it nonetheless relies on the same level of cinematic amplification to tackle a real and pervasive problem, in this case tying Alina’s safety all the way up to a Russian oligarch who rules Boston’s vice.

This structure makes a game out of McCall’s killing spree, placing first Alina’s pimp, then enforcers, then a chief lieutenant (Marton Csokas) as stop-gaps in a journey to the top. There’s something insulting about movies like this, in that they transform the complex and insoluble horrors of sex trafficking into a matter of just taking down a handful of villains, that one good man can make all the difference. The film backs up this sentiment with numerous scenes of McCall encouraging his loyal band of friends with pithy aphorisms like “Progress, not perfection.” This is Zen wisdom that can be found on a novelty calendar, and it’s just one of the irritatingly idiosyncratic tics—his one-man book club, his disciplined and Spartan diet—that are employed in the attempt to add up to a unique human being.

For his part, Washington coasts on autopilot. His pouty resting face, once a display of his young characters’ arrogance and insouciance, later of hangdog vulnerability, here looks empty, as if the actor were contemplating how much interest his accounts were accruing when not delivering lines. From time to time, his measured movement and speech achieves the menace it’s meant to impart, and the actor clearly relishes positioning himself carefully among a throng of goons more than he does swapping expository stories with his old comrades or doling out fortune-cookie advice to his new pals. Washington’s own blend of the tedious with the fitfully intriguing matches the film as a whole, but the action scenes, even a final shootout that uses a giant home improvement store to stage grisly, makeshift defenses, are so awkwardly executed that they fail to enliven the forced severity of the rest of the story. The Equalizer never feels like its own movie, and despite the inherent weaknesses of all movies of this type, it’s more rewarding to revisit the other films where Washington has played this role with more verve than to watch him collect a paycheck for such a dubious premise.