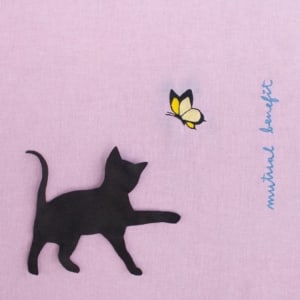 [xrr rating=3.75/5]Last year, Mutual Benefit’s debut studio album was cause to rejoice. Here at last was a new folk artist who operated on the same wavelength as Fleet Foxes or old-school Sufjan Stevens yet had a voice all his own. As folk music loses its street cred under the weight of commercialized bands like the Lumineers, Mutual Benefit’s Jordan Lee isn’t just a new whisper to tide us over till
the Helplessness Blues follow-up. He’s a trailblazer whose first release was worth celebrating—distinctive yet reminiscent of the early 2000s folk revivalists. But debut LP Love’s Crushing Diamond wasn’t Lee’s first release as Mutual Benefit. His whisper has been at work since long before he rose to acclaim, as testified by the reissue of 2011 EP The Cowboy’s Prayer.

The EP is as fully formed as the 2013 full-length, and it’s even a bit more experimental in its instrumentation. The title track’s vocal harmonies are so laden with effects that the singer sounds like some sort of baby alien as keyboards swirl like the Earth around the Sun. Lee relies more on the ivories for this EP than he did on Love’s Crushing Diamond. Hardly a song goes by without him breaking the levee so a river of delicate piano trills can roll out.

Part of the intrigue of Love’s Crushing Diamond was its ability to be earthy without being rootsy; the album sounded more like it came from the Shire than it did from the Appalachians. The same goes for this EP, but some of the synth pads suggest Lee’s sense of the fantastic reaches to the stars as much as it looks out to the pastures for inspiration. The coupling of strings and synthesizers on “Passenger” adds atmosphere to acoustic guitar strumming, and the track is as much a traveling song as its name suggests. But the diverse instrumentation leaves the listener open to decide whether the destination is Mars or the Rocky Mountains.

Reissuing the EP after last year’s debut album could be seen as a cash grab, but it doesn’t feel that way. You can pull a few of Mutual Benefit’s other early EPs off their Bandcamp page for free. Instead, the reappearance of Lee’s final musical short story before he turned to a sonic novel comes across like a request to look over the past with humility. He’s come a long way in just the past year, but that doesn’t mean his previous heights should be forgotten.