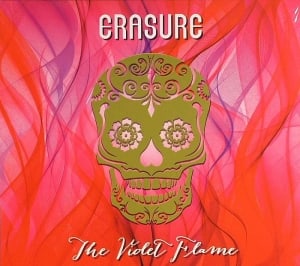 During 2014’s Gay Games, which were held across the Cleveland Area, Boy George packed the city’s Jacobs Pavilion for a night filled with disco, new wave and synthpop vibrancy. The crowd of over 3000 swayed; an assortment of individuals that ran the gamut from 1980s-era club kids to twenty-something hipsters lured by the Boy George legacy. While produced under the Gay Games banner, like the competition itself, the celebration existed without reservations to any sexual orientation, gender, creed or age. It was the presence of positive vibes and a glittery euphoria that brought the crowd together; just a small sampling of the same colorful individuals that Andy Bell and Vince Clarke have been regaling for nearly three-decades under the Erasure alias. While both have expanded their palettes with work outside of this project, the Erasure sound has evolved little over 16 albums. The pair’s newest offering, the 10-track The Violet Flame, is once again a canvas of uplifting synthesizers for Bell to paint stories of frustrations, loss, growth, acceptance and personal strength.

After 30 years, Bell’s vocals have only grown crisper (possibly as the result of better mixing technology). Performing a faux-duet with himself during “Reason”, Bell tests both the lower range of his vocals against the tracks backdrop of staccato ivory plucks and retro-electro nostalgia before settling into the upper-register that dominates the release. When the vocal effects are the most prominent, they are arranged over the most lavish of the album’s productions. As “Sacred” peaks, a massive progressive build sets in to mask the vocal filter. In an era of over-correction, the actual manipulation is likely nowhere near that of Britney Spears and Courtney Love.
Although Bell shows some of the wear of a 50-year-old musician, the album’s lyrics arrive from a writer dozens of years and experiences his minor. New wave thumper “Promises,” the somber “Be the One” and the tribal “Smoke and Mirrors” (which is built around the album’s most adventurous instrumental arrangement) are all tales of failed romances. None of which are much deeper than standard Top 40 drivel.

With artists like La Roux, Miami Nights 1984 and Sam all offering fresh twists on synthpop, synthwave, and male-vocal house, the musical array is prime for Erasure to find increased success with an expanded fanbase. But while there are intermittent snippets of trending motifs (like the chase synths during “Paradise”), the duo seem content to remain in the same niche they created for themselves decades ago. This means a few new singles for their already devoted fanbase, and hopefully solid numbers for live performances, but an album quick to get lost in a dense discography.