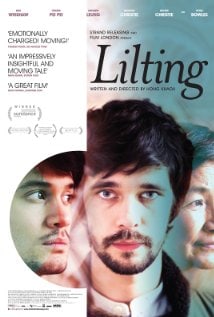 [xrr rating=2.75/5]Writer/director Hong Khaou’s debut feature Lilting is many things at once. At its core, the film is about grief and its accompanying loneliness, with Junn (Cheng Pei-Pei) and Richard (Ben Whishaw) as its subjects both mourning the loss of Junn’s son, Kai (Andrew Leung). To compound the difficulties of that grief is the language barrier preventing Junn, a Cambodian-Chinese immigrant, from understanding Richard’s compassion and motives. And on top of that, Lilting is a carefully measured, emotional gay drama. These obstacles in conjunction prevent Junn and Richard from consoling each other in their shared time of grief. But for all its weighty themes, Lilting stumbles in the overall execution and fails to truly breathe life into the emotional situation.

Lilting begins with Junn ribbing Kai for putting her in a retirement home. The muted conversation goes back and forth, and Junn makes it clear that she hates her drab home and ‘50s style décor (supposedly to make the old folks feel young again). While Kai is obviously saddened by having to put his mother there, he is holding back from telling her a grave secret. Kai never reveals his secret because this conversation and the others he has with his mother throughout the film are merely figments of Junn’s imagination. Daily, she imagines the discussion she would have had with Kai had he not been killed in an accident on the way to her home. But that leaves Kai’s secret to be revealed by Richard, the man Junn only knew as Kai’s roommate and never particularly liked.

Reeling from Kai’s death and guilty about Junn’s situation, Richard determines to pick up where Kai left off – reveal their secret and have Junn move in with him rather than stay cooped up in the unfeeling retirement home. Initially, Richard is only looking for closure and to atone by making Junn’s life somewhat easier. Since Junn spends her days flirting, dancing and kissing Alan (Peter Bowles) Richard decides to hire a translator named Vann (Naomi Christie) to help Junn and Alan finally understand one another and connect on a deeper level (as well as translate some of Richard’s fumbling grief-stricken apologies). The plan backfires and succeeds. Junn and Alan go their separate ways once they are able to verbalize every feeling and especially every minor criticism. But Vann’s presence eventually forges an understanding between Junn and Richard, despite stubborn pushback from Junn.

Thankfully, the introduction of a translator is not treated as a miraculous solution. Junn and Richard don’t immediately warm to one another once they finally are able to speak and be understood. Rather, that aspect of the film is firmly grounded in realism. The nuances of Junn and Richard’s grief, their complex emotional states and motivations are just as confused as they were before. All is still lost, or muddled, in translation, and frequently the extra step of speaking and then being translated encourages a certain lack of honesty.

Whishaw is certainly Khaou’s biggest catch, and this sort of melodrama suits him well. The complex and erratic emotions of his character reflect in his every glance and every movement. And his performance isn’t one-dimensional. Rather than play the one-note grief-stricken lover, there are signs of hope and even a little solace from Whishaw, and that certainly lightens the mood of the film, if only slightly. Pei-Pei, on the other hand, never demonstrates the range that Whishaw has. She is off-putting where Whishaw’s performance draws the audience in. That contrast mimics their characters perfectly, but does an ill-service to the overall film.
Considering that Junn is the central character, Pei Pei’s monotonous performance automatically has the audience rooting against Junn, not fully empathizing with her and wishing Khaou had made Richard the main character.

That being said, it may not be fair to lay all the criticism on the acting when Khaou’s script bears responsibility for drawing vague, half-realized characters without depth. It is a wonder that Whishaw brings as much as he does to Richard, bring being the operative word. Unfortunately, there are a few times where Whishaw’s attempts to enliven his character are noticeably forced, and the result looks overly theatrical. And while overacting is never an issue with Pei-Pei, her final dramatic monologue – undoubtedly meant to reveal the heretofore hidden complexity of her character – is a poor excuse for narrative tidiness, especially when it ends with the clichéd line, “Tomorrow is another day. I will carry on with my life.”

There are positive and negative aspects of Khaou’s feature debut, and naturally, the negatives are glaringly obvious and impossible to ignore. Lilting’s biggest flaw, and it is a troubling one, is its generic treatment of its situation. Grief is a hefty subject and a difficult one to tackle comprehensively, but Khaou’s vague approach negates the emotional impact of Richard and Junn’s reconciliation. The entirety of the production lacks emotional weight and instead is a workmanlike endeavor seemingly intent on merely showing the necessary shots, delivering the threadbare lines and reaching its unaffecting end. Lilting builds toward its climax without any noticeable momentum and instead plods along for 90 minutes exploring (to the point of redundancy) the generational and cultural differences of its amorphous characters.