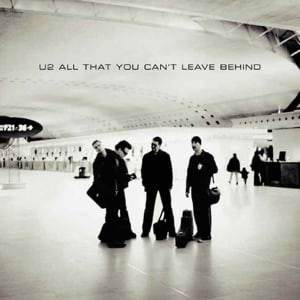 Earlier this month, in one fell swoop, U2 made themselves the most hated band in the world. The somewhat-misplaced outrage that surrounded the band’s mandatory iTunes release of Songs Of Innocence overshadowed the music itself, which may be a good thing in the long run as the critical consensus has been lukewarm. The U2 of sweeping choruses, platitudes and sunglasses has been around for so long that it’s easy to forget that this is really the third iteration of the band. Like the last time the band overhauled their sound and image, this so-called “U2-lite” was welcomed with open arms by critics and fans alike when the band released All That You Can’t Leave Behind in 2000. But fourteen years after its release, one can hear the harbingers of doom and signs of the empty stadium rock band that U2 would become.

One has to go back a few years to understand what motivated the album’s creation. In the ’90s, Bono developed the stage personas of The Fly and MacPhisto, and concerts showcased multimedia paranoia and the darker side of pop culture. U2 flirted with electronic music on the masterful Achtung Baby and the good Zooropa. They wholly embraced dance music on Pop, which did not sit well with fans. U2 produced their most adventurous music yet, but they had committed an unforgivable sin in the eyes of their audience: they stopped sounding like U2. The bright, chiming guitars and soaring melodies that defined the band in the ’80s were fading on Achtung Baby; by the time Pop rolled around, they were gone. U2 had pushed their luck too far, and fans were weary of the band’s superficial public image and increasingly despondent lyrics. No more “Wake Up Dead Man;” it was time to hear inspiring anthems again.

Then 9/11 happened. Though the album was released in October 2000, it gained a certain cultural significance in the U.S. when its songs touched a nation of people struggling to cope with tragedy. The unabashed optimism of “Beautiful Day” and “Walk On” spoke volumes to people that needed hope, and the band became more popular than ever. ATYCLB is often considered the album that “saved” U2, and some would argue that it comforted a nation, which goes a long way towards explaining why the album is still well-regarded.

Fourteen years later, All That You Can’t Leave Behind is still a rousing listen, its anthems still powerful on the surface. But on closer inspection, the notes ring hollow, the band clearly pale imitations of their former selves. Bono is the band’s undoing, as the album contains some of his all-time lyrical clunkers on tracks like “Elevation,“where he puts rhymes ahead of sense, and the muddled pseudo-depth of songs like “New York” and “Peace On Earth.” After the one-two punch of “Beautiful Day” and “Stuck In A Moment You Can’t Get Out Of,” the album starts to sputter, falling short of its opening highs.

“Elevation” is an unfortunate harbinger of present-day U2 at their worst. It’s their first stupid rock song. It could be forgiven as a holdover from the decade-long party the band had just ended, but there was a biting cleverness to even the emptiest work on Zooropa or Pop. “Elevation” is unabashedly stupid, and the band commit to being stupid as intensely as the band commit to…well, everything. This one boneheaded song won’t die, and led to dreck like “Vertigo” and “Get On Your Boots.” It indicates a greater problem with the album: the re-introduction of U2 as a musically conservative rock band.

In spite of a few electronic flourishes and shimmering production from Brian Eno and Daniel Lanois, All That You Can’t Leave Behind marks the point where U2 seem to look back for inspiration. “Walk On” and “Kite” could have been written two decades earlier. The only thing separating “Stuck In A Moment You Can’t Get Out Of” from the gospel version of “I Still Haven’t Found What I’m Looking For” from Rattle And Hum is that “Moment” actually works. It’s the kind of safe familiar album that audiences wanted from U2 at the time…except that it soon became all that U2 could offer anymore. All That You Can’t Leave Behind presents an image of U2 that people know and love without the artistic daring that made the band so interesting.

All That You Can’t Leave Behind has strong singles and a handful of deep cuts worth enjoying, and it’s easily the best album U2 put out in the past decade. But at the time of its release, it was heralded as the band’s third masterpiece alongside The Joshua Tree and Achtung Baby. It’s not. Those two records showcased a band making big steps and taking risks. ATYCLB shows a band retreating into familiar territory from which they have yet to return.