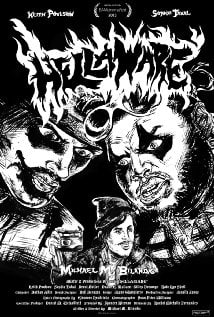 [xrr rating=3.25/5]Few subcultures are as ripe for sending-up as the art world, particularly the snooty, incestuous upper-crust of the NYC gallery scene, in which painfully self-serious creative types mingle with equally pretentious potential patrons, amidst a healthy contingent of desperate hangers-on. The inherent tension between those who strive to create and those who aim to parasitically profit off that creation can make for great satire – especially with both sides surreptitiously eyeing the bottom line – but the general approach for filming these kinds of stories is by now recognizable enough to feel almost thoroughly exhausted. That sense of topical fatigue is present in Hellaware, yet by avoiding generalities and honing in on one specific idea, concerning the search for authenticity corrupted by the shiny allure of fame and fortune, the film carves itself a modest niche. A trim, satisfying comedy of errors, it manages to be both consistently funny and ideologically inquisitive, despite the fish-in-a-barrel familiarity of its subject.

Brooklyn photographer Nate (Keith Poulson) is 25 and predictably adrift, having spent the years since graduation floating through short stints at odd jobs, steadily accumulating bitterness toward his more successful, supposedly less talented peers. He starts the film at an atrocious solo show dedicated to the childish scribbles of a ridiculous faux-outsider artist, whose terrible work has been validated by a self-created mythos involving backwoods isolation and a pilgrimage to Norway. It’s a sharp opening sequence, even if the entire thing a bit on the nose, particularly the punch line of Nate’s love interest (the increasingly ubiquitous Kate Lyn Sheil, in a quick cameo) dumping him for the artist.

Things pick as the film follows Nate back to his dark apartment, where he gripes to friends Bernadette (Sophia Takal) and Gaugin (Duane C. Wallace, playing a living embodiment of ‘90s nostalgia, complete with Gameboy necklace and Dwayne Wayne flip-up shades), bemoaning the need to commodify yourself in order to make an impression. This isn’t an issue of principles; Nate is perfectly willing to sell out, he just has no idea how to go about it, until he drunkenly stumbles upon a shoddily made YouTube video featuring some sub-Juggalo Delaware teenagers rapping about castration and murder over sludgy chopped-and-screwed beats. Convinced he’s just stumbled upon a gold mine, Nate heads down to attend one of the group’s shows, which ends up being a pathetically intimate gathering in one of the teen rappers’ parents’ basement. Having discovered the perfect totemic subjects for a photo essay about down-home American decay, he sets out to make a name for himself, a process which finds him ascending to ever-higher tiers of douchedom, changing his style and abandoning any scant trace of humility.

This process is conveyed via an aesthetic which melds relatively broad humor with a soft-spoken, lo-fi presentation. The film makes a few forays into exploring more than basic comedy, examining the pitfalls of personal branding and affording some basic humanity to its subjects, but also backtracks on that promise by reducing all its characters to detestable caricatures. This doesn’t hamper the humor, but it reduces the overall impact, and the film’s ideas about the production of calculated faux-authenticity, which gets transformed into yet another piece of branded content, might have benefitted from a more rigorous rendering. Ultimately a bit toothless and predictable, Hellaware still manages to stand out, skillfully made and sharply written enough to feel satisfying.