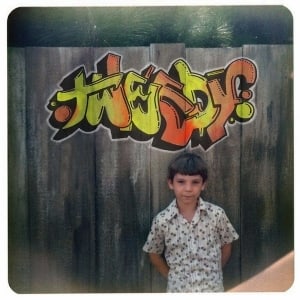 [xrr rating=3.25/5]“Walk on, walk on/ With hope in your heart/ And you’ll never walk alone.” The old Rogers and Hammerstein classic (made famous by Gerry and the Pacemakers) is a fitting summary of Sukierae. It started out as a solo project for Wilco’s Jeff Tweedy, but he brought in his son Spencer on drums and, rather than walk alone, the album is credited to the Tweedy surname. The father -son collaboration would normally be the defining narrative for Sukierae, but the moments of wistfulness, anguish and sadness scattered through these songs weigh heavier because of the recent death of Jeff Tweedy’s brother and his wife’s current battle with cancer. Despite the heaviness of those circumstances, the overall mood is not really melancholy. Tweedy delivers these tunes with his customary obliqueness. If you aren’t clued in to the back story, it’s easy to miss that subtext.

In any case, Tweedy the band does not walk alone; it carries the echoes of Jeff’s other bands, Wilco and Uncle Tupelo. While his voice is central to those groups, Sukierae could easily pass as another Wilco release. The first half is pleasantly unpredictable, with some interesting stylistic leaps. It’s fairly strong, although there is one awkward transition between the twisted headspace of “Diamond Light Pt. 1” and the front parlor folk start of “Wait for Love.” The second half offers a more consistent feel, meandering through Uncle Tupelo style Americana and early Wilco confessional pop-folk. The album features several great tunes, but, like many double length albums, it’s easy to see missed opportunities for pruning. Tracks like “Nobody Dies Anymore” and “Hazel” make little impression against the stronger songs on Sukierae.

Also, while Spencer is a talented drummer and his playing expresses his personality well, Jeff’s voice dominates the album. The best blending between the two is on the opening track, “Please Don’t Let Me Be So Understood.” The guitar thrashes discordantly and Spencer’s choppy beat is insistent, but it’s packed with nervous paradiddles and fills. The lyrics, “I don’t want to be so understood / Boring,” could serve as Jeff Tweedy’s career mission statement. A couple of songs later, on “Diamond Light Pt. 1,” Spencer makes another strong contribution. The tune launches into a dreamy psychedelic groove, propelled by tight polyrhythmic drum work and a taut bass vamp. When the vocals come in, they contrast sharply, with a lightly hazed detachment that’s oblivious to the rhythmic tension. Over the six minute sprawl, the piece evolves: opening into looser reveries, gaining light sonic acid-trail echoes, picking up sharper spikes of intensity reminiscent of “Spiders (Kidsmoke)” and finally melting away in a strange loop of ambient, ethereal sounds. Spencer’s drums are intimately tied to all of those changes, seeming to drive the shifting moods rather than following them.

On the more straightforward side, “Pigeons” is anchored by simple acoustic guitar work, eventually accompanied by bass and light washes of keys. The understated climax is a pretty, Beatlesque instrumental bridge. Meanwhile, Jeff’s lyrics are philosophical, reflecting a Zen clarity, “Let’s sing our songs for the pigeons/ As common as religion/ High on, high on Mt. Zion/ We are all dandelions.” He’s described this as a message to his younger self, and his tired delivery does sound a bit rueful of lessons hard-learned. The best lines on Sukierae, though, come on “New Moon,” with Tweedy capturing an ambivalence, perched between self-deprecation and hurt: “I’ve always been certain, nearly all of my life/ One day I’d be a burden and you would be my wife,” gives way to “Let me hang like a new moon/ Don’t treat me like a stranger anymore.” The swaying country-folk of the verses makes this a campfire song, accented by fiery sparks flying up to the sky, but the distorted electric guitar solo adds a bit of repressed anger, as he lets his frustration slip loose in a way that the vocal never admits. It stops and starts with a ragged tone, but is then brought to heel like a disobedient dog.

Sukierae feels its way through an emotional mine field without directly revealing too many Tweedy family truths. As always, Jeff Tweedy’s songs manage to be moving without necessarily showing how or whether he himself is moved, which has become a familiar unself-conscious pattern to his work over the years. Longtime fans won’t mind this and will find plenty to enjoy as the album revisits his earlier sounds like the notes for unwritten memoir : the Uncle Tupelo waltz of “Desert Bell,” the late night Being There feel of “Flowering,” the Woody Guthrie flavored “Fake Fur Coat” or the sparse Yankee Hotel Foxtrot echo of “Where My Love.” While a more disciplined edit could trim this album to a cleanly cut gem, the excess is also part of Tweedy artistic approach, maybe because it helps him bury the details a little. In any case, however oblique, Jeff Tweedy does hold some hope in his heart and with help from his son, he’s not walking alone.