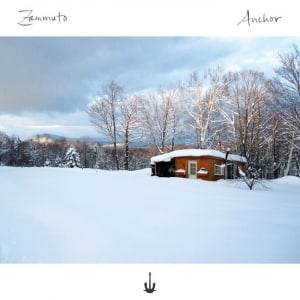 [xrr rating=3.75/5]Quick musical conspiracy theory: Nick Zammuto is the world’s most advanced robot. His technology was probably made with other things in mind, but like any good A.I. story, Zammuto has found his own path in music, away from his corporate overlords who created him. The meshing between man and machine was certainly on display in Zammuto’s last album. That self-titled work had Zammuto’s voice filtered through gears and steel as he wondered weirdly on strange disjointed topics. The classic super-advanced A.I. story has the mechanical man learning how to love, but Anchor has Zammuto exploring a much different emotion: sadness. Anchor is a bleak album. Even through sparkling chords and bouncing beats, an icing of depression creeps its way over most of the songs.

Zammuto’s debut launched off with a song called “Yay”; Anchor fades in with the dirge-like “Good Graces.” Something’s changed between albums, but Zammuto is just as firm with his songwriting in colder territories. “Good Graces”’ loping keyboard serves as a foundation for Zammuto’s soft coo as he obsesses over how he can “get inside, get inside good graces,” before he sings, “I wish I was a cherry tree/ Every time she’d flash she’d take a few of me.” He delivers that line with a desperate, nearly defeated longing. “Good Graces” sets the stage for Zammuto’s sharpened lyrical chops. “Electric Ant” rides a cold and unnerving groove as Zammuto meets a girl who’s “profanely pretty”and hangs out with a guy “on a bullet train/ He was the ammunition.

” The raucous “IO” has Zammuto on the run across the Americas on something called a “shit catapult.” “IO” is the catchiest example, but Zammuto has taken some lessons from video game music and the good bits of 1980s electronic music. The opening of “Great Equator” has Zammuto singing, “Oh my love/ It’s been more than fun,” in a voice that wouldn’t be out of place on a Eurythmics album, and the stark drum moves throughout Anchor have a nice Depeche Mode influence to them. “Need Some Sun” has the album’s most instantaneous burst of melody with a slinky bass line rubbing up against blinking keyboards as Zammuto proclaims he’s “going to California” in one of the album’s only sunny moments.

That’s not to say Zammuto can’t create his own weirdness. Drummer Sean Dixon gets a mad workout on “Hegemony” has Zammuto harmonizes with himself over the perpetually shifting song structure. The pulsating and shimmering “Henry Lee (Trad.)” is the most wintery song on an album filled with shiver inducing tracks, thanks to angelic synth lines and Zammuto whispering about the titular entity coming and going like the seasons. It might seem like the mood of Anchor jumps around wildly, and it does, but Zammuto keeps it all in a singular, logical world. Logical to Zammuto at least. For all the insanity on Anchor, Zammuto ends on a meditative note. “Your Time” reads like a robot hymn about decay and rust. “Sooner or later gonna meet your maker/ Oh yes sir gonna meet her…will it fade to black?/ Or will it fade to white?” Zammuto sings in his calmest tones. “What will you take?/ What will you give?” are the final words on the album. It’s something every artist asks themselves and, if Zammuto is wondering, he’s given something great.