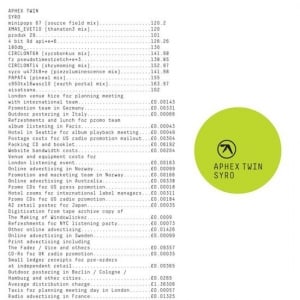 [xrr rating=4.0/5]After producing five varyingly essential albums over nine years, Richard D. James deserved a break. The legendary producer spent the better part of the 1990s innovating and becoming the world’s most recognized IDM auteur, one of those rare genre artists whose influence reaches across stylistic barriers and becomes a formidable presence within the general culture at large. That’s the kind of artistic success that allows a cultural icon the freedom to do almost anything as a next step without being called into question. After 2001’s Drukqs, his fifth album as Aphex Twin, James used that freedom to take that well-deserved break.

It’s been 13 years, but even this long out of the spotlight, James’ influence on popular music hasn’t faded. That’s one of the reasons why it seems wrong to call Syro a comeback record: he really has been here all along. Change is an inevitable, so the question becomes: how has Aphex Twin evolved since 2001?

Syro is our first glimpse at Aphex Twin’s new role in the culture. It’s a high-velocity album of extremes, surging from one place to the next in an unbroken chain for 64 minutes. It shares more structurally with a DJ mix than a standard album—constantly in a state of movement, ascending and descending—but James’ splintered compositions are also conceptually analogous to jazz: expansive, richly textured, perpetually folding and unfolding back into itself. It always feels on the verge of falling apart—particularly on songs like “CIRCLONT6A [141.98],” where the staccato, percussive attack of the instruments weave around and collide into everything else with almost unfathomable momentum—but it never does, and the threat just makes it all the more exciting. This is something that “traditional” analog music cannot normally achieve.

James doesn’t dwell on anything on Syro, instead committing to the approach that if every piece of the puzzle isn’t pulling in separate directions all at once, the music must be stagnating. This is how he manages to build tracks off of nearly every existing electronic music style—from house, drum and bass, dub, glitch, trip-hop, and ambient to everything in between—and make it sound fresh and nuanced. “produk 29 [101]” begins with the groove of a wobbly left-field hip hop instrumental before crackling into a more consistent four-on-the-floor house or electro beat; “PAPAT4 [155]” comes alive with a frenzied breakbeat, but its bubbly polysynths and ambient pads push it toward a subtler dub sound, or, in its slower sections, even the lo-fi melodics of chillwave. To try to compartmentalize or sift through the influences on this album is a misguided task, not only because it’s so dense and richly crafted, but also because it doesn’t really matter; Syro’s broad scale and inclusive style doesn’t detract from the fact that it’s a singular achievement from the only artist who could ever make something like it.

Much can be learned of the producer’s intentions just by examining the album’s much-talked-about packaging, which includes an infographic that details every piece of musical equipment used in its creation and a list of each song’s beats-per-minute. This, along with James’ patented impenetrable song titles (“s950tx16wasr10 [163.97],” for example) act as demystifying agents, his tongue-in-cheek admission that his craft is, at its most basic, just processed sound signals. For this reason, James doesn’t shy away from making purely mechanical music like the stark, overpoweringly computerized “CIRCLONT6A [141.98].” In fact, part of what makes Syro so compelling is that he directly juxtaposes the robotic with the human.

This theme returns periodically over the album, most affectingly on the record’s final track, “aisatsana [102],” a song that features only the gentle reverberation of lightly struck piano chords, acoustic sound without manipulation or exaggeration. Listening closely, “aisatsana” evolves like the other songs, progressively building stray melodies and notes onto the repetitive chord progression, but it’s done with immaculate subtlety, the antithesis of the preceding 11 songs’ propulsive energy. The track ultimately climaxes on what turns out to be Syro’s closing note—the album’s most sobering moment—a beautifully uplifting chord that seems impossibly alien after an hour of brutal sonic experimentation. In five short minutes “aisatsana” manages to recontextualize everything that came before it, and, despite being easily the simplest and most incongruous composition on the album, it’s probably the most meaningful.

There’s no doubt that Aphex Twin’s return makes for a challenging listen, but that’s what comes of ambition. Syro is less of a “comeback” and more of a reappropriation, the kind of progressive album that, through its conglomeration and shattering of today’s conventional musical ideas, seeks to unify, distort and elaborate on the entire electronic scene rather than reinvent it. For over 20 years, Aphex Twin has been an anomaly, one of electronic music’s singular deviants. But on Syro, 13 years removed from his last album, he becomes more of a centralized force, a landmark that sits within the culture rather than outside it. Of course, in the fractured electronic music landscape of today, that’s a role that’s just as vital, and one that fewer and fewer artists are willing to accept.