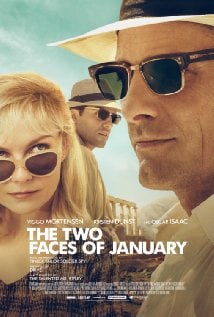 [xrr rating=2.75/5]The Two Faces of January plays out like The Talented Mr. Ripley– lite. Yes, director/writer Hossein Amini adapted the film from a Patricia Highsmith novel, but every detail, down to how the characters dress seems cribbed from Anthony Minghella’s superior film. Opening in 1962, we first meet Rydal (Oscar Isaac), an American working as a tour guide in Athens. A Yale graduate, he has fled from familial expectation and is now charming (and ripping off) young foreigners as he tells them the tale of Theseus and his father Aegeus while taking them up the steps of the Parthenon. Rydal is living below his station, the black sheep of a wealthy New England family, who ignores his mother’s plea to come home.

A fateful encounter with Chester (Viggo Mortensen) and Colette (Kirsten Dunst), a pair of American tourists, pushes Rydal from his daydream of idle living into treacherous territory. Chester reminds Rydal of his father, a Harvard professor who has recently died. He falls in with the pair, a fateful decision that leads him into danger when he learns that Chester isn’t in Athens just for a vacation and helps him cover up a murder.

A suspense film without any jolts and a character study painted with shallow characters, The Two Faces of January may feel like a throwback to the cinema of Alfred Hitchcock, but it doesn’t have any of the charm or suspense that propels films like Foreign Correspondent or The Man Who Know Too Much. Amini puts his actors through the paces of being strangers in a strange land, couching Mortensen, Isaac and Dunst in sumptuous Greek landscapes, but the tension is never tangible. Colette falls for Rydal, not because the younger man exudes any sort of charm, but because that’s what she’s supposed to do in a film like this one.

Things pick up slightly in the second half of the film. The trio flees Athens for Crete following the murder. While Amini does not sufficiently capture the paranoia that should be steeping his characters, he does make Greece look absolutely gorgeous. There is supposed to be some father and son dynamic going on between Chester and Rydal, but it mostly feels flat. It’s a battle of egos, one where Colette is nothing more than a trophy, a complete waste of a character.

Both Mortensen and Isaac are class actors and raise the bar here, adding nuance to places where it is sorely lacking. Once Colette is more or less out of the way, The Two Faces of January becomes a scuffle between the two men, a fight neither can win since if one goes down, the other is likely to follow. Amini is making the point that, like father and son, Chester and Rydal are the same man, each a grifter desperately trying to avoid facing his true identity. Conflicting dualities can be intriguing, if thoughtfully handled. Unfortunately, The Two Faces of January moves into a race against the clock in its final act, pushing any meaningful character development to the side in favor of chase scenes through the streets of Istanbul.