January 27, 2021
Home Books Detroit City Is the Place to Be: by Mark Binelli 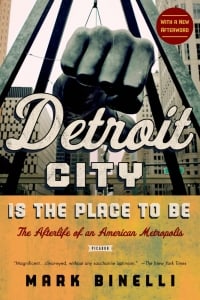 [xrr rating=2.75/5]Detroit could be the indicator of American economic collapse. Despite the government’s auto bailout, Detroit stands as a wrecked reminder, a beacon of fascination for those who want to see a once great metropolis completely leveled, a living acropolis failed by big business. Once the bastion of modernity, the font of the American auto industry, Detroit is now a place of crushed dreams, a city where miles of street lamps don’t shine, where skyscrapers and theaters sit empty.

In his book, Detroit City Is the Place to Be, Rolling Stone contributing editor and Detroit native Mark Binelli examines what happens to a city that stands on the verge of ruin, a place populated by violent criminals, hold-outs who don’t want to leave home, hipsters looking to capitalize on cheap property, tourists in search of “destruction porn,” artists using the shells of buildings as installations. But those are the stories told by the journalists who pop in for a quick feature and then leave. For his book, Binelli moved back to Detroit in order to dissect what is left of the city.

In its most winning sections, Binelli infuses Detroit City Is the Place to Be with a wry sense of gallows humor, gamely reporting the laissez-faire attitude in which outsiders regard the city. He watches a performance-art piece by Matthew Barney which features big men doing manual labor. But rather than employ the scores of jobless Detroiters, Barney flew in actors to play the parts. Binelli watches as the Red Dawn remake films nearby, using “not merely a set designed to resemble a ruined American city but an actual ruined American city.”

But wash away the hipster whimsy that Detroit draws and you still have a dead city riddled with horrific violent crime. Binelli spends some chapters examining meaningless murder, a beleaguered police force and a state government that is more than happy to disown the whole mess. He introduces his readers to a hoary gallery of ex-mayors and politicians who have flown into office on the fumes of promise but leave disgraced, adding to the city’s misery. Take for example, Kwame Kilpatrick, the city’s scandalized ex-mayor who was sentenced to 28 years in prison following counts of perjury, obstruction of justice and racketeering. In a place as fucked up as Detroit, who needs a skipper this corrupt?

While Binelli’s writing is even clear and concise, Detroit City suffers from poor sequencing. The book feels like a series of loosely connected essays about the city rather than a true post-mortem. Some of the chapters get bogged down in names and minutiae, making for a boring read.

Detroit City Is the Place to Be isn’t a total condemnation of its subject. Binelli infuses a flicker of hope for the city’s future. Since all bets are off, radical ideas can take seed quicker there. A school for teenage mothers teaches them how to farm while getting their high school degree. City blocks have been razed and used for agriculture. Detroit may be America’s first post-city. However, according to Binelli it is more than a petri dish for urban planners for afar. There is still enough life in Motown to still be Detroit.