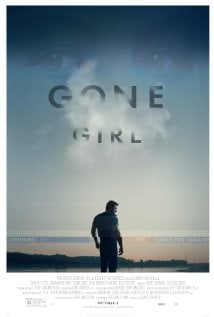 [xrr rating=3.0/5]It is impossible to truly evaluate Gone Girl without spoilers, so if you haven’t read Gillian Flynn’s book or seen the film, consider this a fair warning. Fans of Flynn’s novel will know that Gone Girl is a twisty thriller, one that is laid out in the dueling voices of its lead characters, a married couple, both unreliable narrators. David Fincher has often mined source novels featuring characters with unscrupulous morals for his films and Gone Girl is a book just as salacious and addictive as the one the director adapted for his prior film, the utterly superfluous English-language remake of The Girl with the Dragon Tattoo. But Fincher has always been a director who prefers to observe his icy characters from afar, a trait that may not necessarily work for Gone Girl, a story fueled by anger, betrayal and revenge.

Gone Girl opens as Nick Dunne (Ben Affleck) arrives home to signs of a struggle. His wife, Amy (Rosamund Pike), has gone missing. Nick seems oddly unperturbed by her disappearance. We soon learn, through flashback in the form of Amy’s diary, that couple recently left New York City after losing their writing jobs and have moved to the small Missouri town where Nick grew up. It is the couple’s fifth anniversary and we find out, through Amy’s pages, that their fairy tale romance has gone the way of the local economy: once thriving and voracious but now barely viable.

On the surface, Gone Girl is a tightly wound procedural, a murder mystery that features numerous interlocking pieces. We know that the couple is having money issues. Amy, the inspiration for her parents’ wildly successful children’s book series, has seen her trust fund vanish. But unlike Flynn’s source material, where the economic collapse feels palpable and real, Fincher seems to think a few staid shots of foreclosed houses and shuttered businesses is enough to create atmosphere. It isn’t. He even unwisely leaves out one of the book’s best sequences, where Nick and his father-in-law search an abandoned mall for clues and confront a colony of homeless men squatting there.

Although a film can almost never penetrate character the same way a novel can, the adaptation of Gone Girl is more concerned with pushing along the story than really delving into the psyches of Nick and Amy. These are two extremely fucked-up characters and it’s hard to evaluate the movie if you enter armed with the knowledge of Flynn’s extensive backstory in tow. Fincher and Flynn (who adapted the screenplay) cherry pick, giving us only the most important details and focusing more on the crime rather than the events that may or may not have led up to the disappearance.

If you have read the book, you know Flynn keeps us questioning Nick’s innocence until the big twist at its midpoint. We have the luxury of Nick’s voice. He tells us when he’s lying. When he pictures his wife bleeding out with her head caved in, we are unsure if he’s imagining or remembering the scene. Fincher’s version casts no doubts. We are pretty much told that Nick is innocent from the get-go. That he is being set up. This information robs the audience of one of the pleasures of the book: trying to determine if Nick is innocent or guilty.
Both Affleck and Pike turn in strong performances, especially as we discover that Amy is a complete psychopath. But something is missing here. In Zodiac, the crime teased out the nuance in the broken characters. Gone Girl feels a little too cool for its own good.

The ending of the book has been a common complaint amongst readers and Fincher and Flynn stick pretty close to the original material. Nick doesn’t take out his deranged wife. That would be too much of a crowd-pleaser. Instead, Flynn gets a second chance to revise her troublesome finale, but rather than change it, she simply makes it more believable. Gone Girl may not adequately probe the depths of the broken Dunne marriage (and reconciliation), but it’s a sleek, entertaining few hours in which to lose yourself at the movies. Still, give yourself the gift of more hours and read the novel instead.