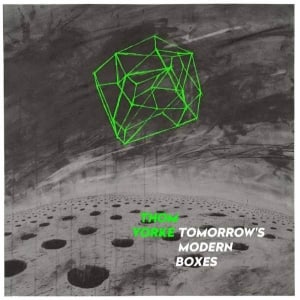 [xrr rating=3.75/5]There are so many conversations to be had. When did “pulling a Radiohead” become “pulling a Beyoncé?” Why are U2 instantly hated, but Yorke is applauded? Why all the hate for post-In Rainbows work? Between snide Pitchfork remarks, discussions on how long an album deserves to sink in and whether this distribution is revolutionary or not, it’s easy to slip into an old, jaded mind set. The conversations mentioned above need time and a forum, but not in this review; it distracts too much from the solid package Yorke has delivered. It’s not a masterstroke, but it’s some of the most enjoyable music of the year, and, if nothing else, an interesting direction for him to explore.

I have a sneaking suspicion that many who deride Radiohead/Yorke’s work over the last few years don’t like the more festive shine on some of these tracks. Of course, Yorke has had plenty of sad-sack moments, but “Separator” from The King of Limbs and pretty much every song from Atoms for Peace has a funky and fun backbone. Tomorrow’s Modern Boxes is often a chilly affair, but some of Flea’s groovy DNA is embedded in the notes. Album centerpiece “The Mother Lode” is the single most joyous thing he’s ever touched, and opening track “A Brain in a Bottle” has his gorgeous falsetto swinging over an undulating beat. Those spine-tingling notes on “A Brain in a Bottle” are fantastic reminders that Yorke is one of the best vocalists in the game. His soft coo is sinuous, flexible and mesmerizing all at once. His lyrical work is often pushed to the forefront, but Tomorrow’s Modern Boxes often feels like he’s showing off his pipes, a welcome and delicious change. “Guess Again!” is dark and twisted, but it feels like he is making a sick grin as he sings, “Wild dogs are howling,” and when he delivers the title it sounds like as much of a taunt as a come-on.

Don’t worry sad-boys, the album still has plenty of heartbreak for you. The dreary lurch of “Truth Ray” is a foggy day in London put into one neat package with Yorke wearily singing, “my love slips away from me,” before mumbling, “oh my God, oh my God…I’ve lost everything,” as the chilly atmosphere envelopes the sound. The miniature drone of “Interference” has him seeing the future and instantly regretting it, “In the future, we will change our numbers and lose contact/ And the future leaves will become brown, when we want them.” It’s a tragic meditation on decay that stands up to some of Radiohead’s most crushing moments.

If Tomorrow’s Modern Boxes has a weakness, it’s the more ambient second half. These aren’t bad songs by any means, but “There is No Ice (for My Drink)” and “Pink Section” feel a bit lacking without Yorke’s voice. That being said, “Pink Section” does have an interesting, near field-recording feel that he toys with excellently, and the calmly groovy closing track “Nose Grows Some” is a perfect cap to the entire escapade.

Tomorrow’s Modern Boxes has one truly brilliant moment that will go down as one of the finest pieces of work Yorke’s ever done in “The Mother Lode.” It’s ecstatic in its funk and he pushes his voice to the very forefront during the verses, only to retreat into wordless, wonderful choruses. The bouncing percussion and comforting synths hint at something less gloomy in his future. If the man wants to make happy music, I’m all for it. Tomorrow’s Modern Boxes is proof he can do it quite well.