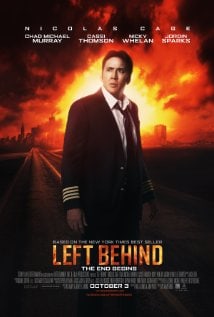 [xrr rating=2.0/5]The latest cinematic iteration of the biblical Rapture is incompetent, ridiculous and completely earnest. Those first two elements make it a terrible movie, but that final element makes it a fun and kind of endearing one, its cast’s stone-faced dedication to their material charming even if Nicolas Cage doesn’t go nuts even once in its nearly two hour running time.

Yes, Nicolas Cage made a Left Behind movie. Fans may gnash their teeth over what seems like the final nail in an acting career that has seemingly gone to Hell. Cage recently made overtures to indie respectability with David Gordon Green’s Joe. But he quickly returned to questionable material with the terrible straight-to-VOD Rage, which gave Cage a few scenes of signature madness in a role he mostly slept through. The actor still looks weary in Left Behind, but much like his supporting cast, he treats the subject matter seriously and gives a credible performance in spite of material that can’t have been easy to work with.

Chloe Steele (Cassi Thomson) is celebrating a birthday, but it’s not a happy one. She’s flown home to New York (badly played by Baton Rouge) to surprise her father, airline pilot Rayford Steele (Cage), but Dad took a last-minute assignment to London. Chloe waits for her father at a curiously sedate JFK Airport only to learn that his trans-Atlantic flight is a tryst to see a U2 show with his stewardess-mistress. A disappointed Chloe goes home to a different kind of a conflict, a mother (Lea Thompson) whose evangelical beliefs she finds completely foreign.

Drama unfolds on the ground and in the air, as the passengers on Steele’s flight to London come from a variety of walks of life. But this isn’t Stagecoach so much as a family-friendly version of the lousy flightpath melodrama I’m So Excited!, Almodóvar’s signature sassy transvestites replaced with a grouchy dwarf (Martin Klebba). The parallel action of earthbound souls and heavenward passengers makes you wonder if Almódovar had the Rapture in mind when he made his disappointing airline comedy. But Left Behind is more successful as camp than I’m So Excited! for the simple reason that the latter was knowing and ironic but the former doesn’t have a knowing bone in its digital body.

The film’s $16 million budget doesn’t show, apart from a few explosions and car crashes. The special flight effects that a disaster movie like this must depend on look Syfy network cheap. Worse are the musical cues, as incomprehensible as in any of David DeCoteau’s talking animal movies. As Captain Steele tries to avoid a mid-air collision with another airliner, the filmmakers take this precarious moment to introduce…a drum solo. I so want to re-score the film with “Alley Cat” at its “this is only the beginning” climax.

Technical problems abound, with awkward cuts and sound editing, and the bad rhythm is contagious when a shopping mall audience watches a hip-hop act clap completely out of time with the music. The mall happens to be where we witness the Rapture, when children and believers are taken up into heaven, leaving a pile of clothes and worldly possessions in their wake. When the Rapture comes, there is unfortunately no shot of Wembley Stadium filling up with empty clothes in the bleachers and a confused Bono wondering where his mates went.

Left Behind is essentially a bad disaster movie, but I swear to God I’ve seen worse movies this year, and worse Nicolas Cage movies at that. I can’t in good faith tell you to see it, but I’d be lying if I told you I didn’t enjoy it.