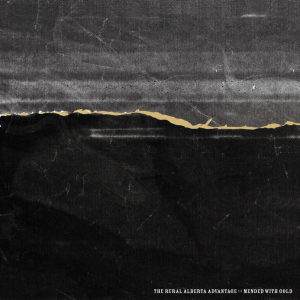 [xrr rating=3.0/5]The Rural Alberta Advantage’s debut LP, Hometowns, came out of nowhere. Self-released in 2008, the band’s debut album was a smattering of lo-fi mastery, genuine pathos and heart-wrung tension, all punctuated by Neutral Milk Hotel-esque tendencies. And while the album wasn’t a mega hit, it was enough to garner the sparse indie-rock trio (composed of vocalist/guitarist Nils Edenloff, percussionist Paul Banwatt and multi-instrumentalist Amy Cole) some much-deserved recognition. Soon the band found themselves with a ballooning audience and a record deal with Saddle Creek, which would properly release Hometowns as well as the band’s sophomore effort, the sometimes lackluster Departing, in 2011.

Now the band has returned with its third LP, Mended with Gold, and twenty seconds in, the RAA’s modus operandi is evident: the album is indent on altering the band’s tried-and-true, stripped-down structures by throwing in an onslaught of bombast and explosive production. To their credit, it seems like a plausible move. For a band that made its name with raw talent and grit, taking their sound to the next level should be the next logical progression. Mended with Gold is a mission statement of sorts, and it’s reiterated throughout the album: the sound is bigger, bolder, brasher, brighter. And the band’s signature frantic guitar strums, gorgeous vocal harmonies, and panicked, incessant drumming are all there in spades—furthering the RAA’s identity as a small operation that can pack a powerful punch at will.

The question is, however, is it working? A few songs in, a pattern emerges when each track begins to rise and fall in waves, fluctuating between the overblown and the subdued. “Our Love…,” “This City” and “Terrified” all begin with lone, stripped-down acoustic before giving way to an explosion of cymbals and distortion. It’s almost as if they’re taking cues from their Canadian peers and experts in bombast, the New Pornographers and Arcade Fire. It’s not a bad approach, as the quick-tempered arrangements have worked well for the band in the past, but with pristine, crystal-clear production, the band’s ingrained ruggedness sometimes feels forgotten or abandoned.

That’s not to say Mended with Gold is a misstep so much as it’s too heavy-handed at times—because when the band scales back and looks inward rather than outward, it’s clear that the RAA still has it. Tracks like “Vulcan, AB,” “To Be Scared,” “All We’ve Ever Known” and the excellent single “On the Rocks” get back to the more compartmentalized instrumentation and terse arrangements that they handled so adeptly in their earlier work. Plus, the front-and-center production isn’t all bad. Songs such as “Not Love or Death” would fall flat without the skills of Matt Lederman and Leon Taheny behind the boards, keeping the music from getting too muddled or misshapen.

Still, the album’s more expansive production doesn’t always benefit the band’s lo-fi, jagged origins. Things are now louder, more vivid and better pronounced, sure, but the appeal of the RAA is that they thrive in the shadows, not bask in the glow of the big, bright lights. The band has expanded sonically, but Mended with Gold can sometimes come across as business as usual with the knobs turned up. And while the songs—apparently written while Edenloff was renting a remote cottage in the Bruce Peninsula—showcase the band’s same signature wistfulness, some of the album gets too caught up in presentation: Mended with Gold doesn’t seem as concerned with what it’s saying so much as how it’s saying it. What’s missing are the intricacies, the attention to detail, the special nuances that emerged from the tracks of the band’s debut. While the band’s knack for stitching together heartsick melodies with lovelorn lyrics is intact and perhaps stronger than ever, it sometimes gets lost in the noise of taking their sound to new, loftier heights.

[xrr rating=4.0/5]What was surprising about Avi Buffalo when they released their 2010 self…