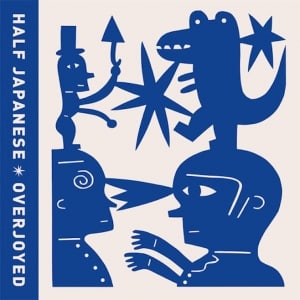 [xrr rating=3.25/5]“Brave enough to say we care/ You and I” celebrates Jad Fair over the shimmery yacht rock of the aptly-titled “Brave Enough.” Although the founder of seminal art-punk outfit Half Japanese has still yet to master, or probably attempt, any of the conventional punk-rock chords, there is something so comforting about the single’s warm island-inspired tones. Following a lengthy hiatus, it has been 13 years since the one-time prolific songwriter released a dedicated full-length, Fair and his rotating ensemble have returned tighter than ever with Overjoyed. No doubt aided by the production duties of Deerhoof’s John Dieterich. While the psychedelic wanderings and dissonant freak-outs might be kept to a minimum across the albums quick 39 minutes, Fair’s charm and appreciation for the simple consequences of life remain at the redline.

The album’s title steers the album’s loose concept, and as the bleak percussion of album opener “In Its Pull” stomps atop the vocals of Fair, he establishes the album’s ethos, “Good luck had me in its pull/ Good luck grabbed me by my nose, and made my life brand new and so wonderful/ Choose the life that you done chose and be a brand new you.” Even though the album’s instrumentals often lean toward the chaotic, an innocent appreciation for life soaks into every unshielded pore of the release. When the media gives us so much to worry about, and popular culture gives us so much to aspire to, Overjoyed is about finding the contentment in life and accepting the joy that already exists around us all, “Pretty good/ Pretty great/ Two thumbs up/ First Rate/ Our love/ Hooray” shouts the frontman above the jittering diner-rock eloquence of “Our Love.”

It’s true that the lyrics often sound like failed poetic exercises, just read through sophomoric symbolisms the of “The Time Is Now,” and the music has a tendency to seemingly become bored with itself, you just know that it all rushes forward from a deep well of untainted honesty that the Fairs have managed to protect for almost 40 years. While many critics like to comment on an album’s timelessness, which Half Japanese convey simply due to their equipment selections, this album manages to break through the barriers of age and experience. Each generation seems to hate the following’s genre du jour, and no new parents ever wants to succumb to the tortures of Radio Disney of Teen Bop parodies, yet it’s hard not to want to share this album with acquaintances from the nursery home to the retirement center — if your circle happens to stretch that far. Oxygenarians will find a moment to reminiscence during the surf-guitar intro of “Overjoyed and Thankful” while the kid in all of us will get a kick out of day-dreaming about the chocolate pool and candy kisses mentioned in “Each Other’s Arms”.

Not classically trained nor equipped with the best equipment or marketing teams, Half Japanese created influential careers out of earnest hard work and intimacy. As the album suggests, when one is attempting to do what they love, it’s hard not to be overjoyed…. even when there are layers of noise to maneuver through. To steal one more line from the album, this one from “We Are Sure,” “Choose happiness for your fate, it is never too late.”