January 27, 2021
Home Music Lucinda Williams: Down Where the Spirit Meets the Bone 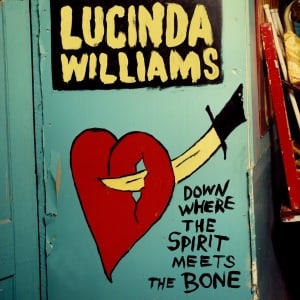 [xrr rating=4.0/5]Hey, remember when Lucinda Williams records were sort of an event? There was an eight-year span between 1980’s Happy Woman Blues (great record if you can find it) and her self-titled major label debut, and in one 20-year stretch she only put out four records. Things have sped up a bit for Lucinda recently. Since 2001, she’s been releasing albums at a steady clip, including a live double-album retrospective. Now comes another double album, Down Where the Spirit Meets the Bone. The question for fans is: can she maintain the quality of her work given this accelerated schedule? And happily, the answer is yes. Down is a strong collection of material indeed.

Despite the scope afforded by a two-album, 20-song set, Lucinda never really strays outside of her comfort zone. Admittedly, that comfort zone is larger than most musicians’, and the fact that she has twice as much room to play in it affords her opportunities to display her virtuosity in any number of areas, from acoustic strummers to swampy blues-rock to reflectively bittersweet numbers. This is another way of saying that there are a lot of good songs on this record, as well as a few less compelling ones. Lucinda’s strengths and weaknesses are all on display, and fans needn’t worry that she spread herself too thin.

The good news starts early, with the chugging groove of “Protection,” a simple song that gains in strength by the interplay of twanging guitar with Lucinda’s heartfelt vocals. This is a formula that is used to good effect throughout the record, as on standout tracks like “West Memphis” and “Something Wicked This Way Comes.” Lucinda’s band has always churned the swampy gumbo of Southern-inflected blues-rock, and it continues to do so here. “Everything But the Truth” channels a bit of gospel into its irresistible groove, with some of the best spitfire vocals to be found on both of these albums.

There are also plenty of downtempo numbers, though “downtempo” should not be equated with “mellow.” Fury mixes with resignation and bitterness in equal measure in “Cold Day in Hell,” while “Big Mess” sees Lucinda at her throat-cracking, bursting-into-tears, falling-off-the-barstool best. The vocals here might not be anyone’s idea of polished—in fact she wavers in and out of the note pretty much all the time. But they are tremendously expressive, at least for listeners who don’t expect auto-tuned “perfection” with every breath.

The news isn’t entirely good. Lucinda remains prone to throwaway tunes whose lyrical repetitiveness acts as a limitation more than anything else. “Burning Bridges,” “Foolishness” and “Walk On” all fall into this category. Even these tunes, though, offer competent musicianship and a distinctive lyrical delivery. Probably this double album could have been condensed to a single 10- or 12-song set of unparalleled excellence. But would anyone have wanted that? Nah— give me Lucinda, warts and all.

Down Where the Spirit Meets the Bone would make a terrific primer for listeners new to Lucinda Williams. There is enough musical variety to keep things interesting, but nothing as oddball as “Wrap My Head Around That” or “Come On” from 2007’s West. Devoted fans might be disappointed for the same reason, but most will probably be pleased with the singer’s decision to stick with what she does best.