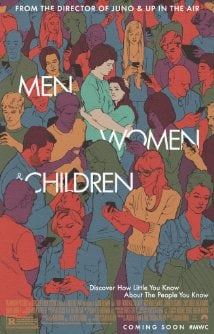 [xrr rating=1.0/5]Let’s not mince words: Men, Women & Children is the worst wide-release film I’ve seen since I started reviewing movies. It’s a film more deserving of consideration as one of the worst ever made than the benign schlock churned out by mad dreamers like Ed Wood or even Tommy Wiseau. Comparisons to Paul Haggis’ disastrous, pandering Crash have already been made by scores of critics and viewers, but it’s an easy connection. Jason Reitman’s picture swaps condescending racial politics for an alarmist view of the internet that—stop me if you’ve heard this one before—says we’re all just too damn glued to our phones and our porn to, like, notice all the life around us, man.

It would be bad enough simply to stick with this caricature of a nuclear unit as they deal with their oversimplified problems, but soon the film expands to take in a whole Texas suburb filled with digital age straw men. Tim Mooney (Ansel Elgort) suffers the dual existential blow of his mother’s abandonment for a new life in California and a nihilistic interpretation of Carl Sagan’s Pale Blue Dot, prompting him to quit the meaninglessness of football in favor of…playing MMORPGs. But at least Tim is a boy, and thus spared the worst of the film’s judgments. Teenage girls exclusively talk about dieting and boobs and their plans for losing their v-cards. For good measure, an anorexic wiles away the time by visiting “prettybitchesnevereat.com” to get #thinspiration as she diminishes to the disturbing compliments of her classmates, who take her seriously now that she is no longer fat (no one of even average American weight features in this movie, though, sparing us the ordeal of having to look at an overweight person while asking us to tut-tut this girl’s body image issues).

The adult women are even worse. Jennifer Garner plays an obsessive mother who transcends helicopter parenting for its drone successor, using devices to monitor her daughter’s every message and search—every keystroke, even—in an attempt to exert total control. (This does lead to one of the film’s most inadvertently funny moments, though, when the daughter informs her beau, as if divulging the location of buried treasure, of her “secret Tumblr.”) At the opposite end of the spectrum lies Judy Greer as a failed actress who passive-aggressively pushes her daughter into the same field and pays for all the expensive dance and acting lessons by willfully taking risqué photographs of her underage daughter to sell to anonymous perverts. Greer, one of our most charming and entertaining performers, should not be reduced to the scene in which she inquires (hypothetically, of course) as to whether the act of selling child pornography of her own offspring is, how you say, bad.

If this reads like a mere catalogue of absurdities, that is mostly what the film is: a collection of types erected to score the easiest points against a one-sided estimation of the internet’s influence. But since digital communication and access is simply a part of life as we now know it, the film is necessarily a reactionary work. It’s telling that the film’s chief emotional energy is put toward a lament for the crumbling of marriage as an institution, even though sex in this film consists of 1950s cutaways to a close-up of a bed corner slightly jerking with motion, or the doorknob of a bedroom, or a cut from masturbatory preparation to sprinklers activating on a lawn. There’s even a wistful nostalgia for fathers indirectly passing down pornography and sexual self-discovery to their sons in the form of magazine stashes. This conservatism infects every aspect of the film, down to the rank tokenism of some characters, like a gay teen whose dialogue consists only of flamboyant declarations of love for the show “Breaking Amish,” or Rachel’s black lover (Dennis Haysbert), whose character starts and stops at being well-endowed. Furthermore, web slang like “IRL” is treated like code words for some nefarious teen underworld, imbuing the dialogue with Go Ask Alice levels of generation-divide panic.

Hollywood films about the internet see the complexities of the web through the blinkered view of the famous, who look at it and see only piracy, anonymous harassment and a new platform on which they have to promote their wares. Men, Women & Children speaks through “the common man” (in the same way that Barton Fink trumpets the cry of the fishmongers), but in practice it resembles those segments on Jimmy Kimmel’s show where celebrities get to read aloud the nasty tweets made about them. It is ostensibly a strike back against a warped culture of negativity that, in truth, only reinforces preexisting power structures. In the case of this film, it does not reaffirm the authority of the rich and famous but of “traditional values” left vaguely defined so that it does not have to admit that those values promoted abuse well before the invention of the internet. And really, it’s hard not to leave the theater with the impression that if these people had only used their constant surfing and monitoring to look up tips on foreplay and sexual maneuvers beyond clumsy missionary, their various, interlocked fiascos might have been avoided altogether.