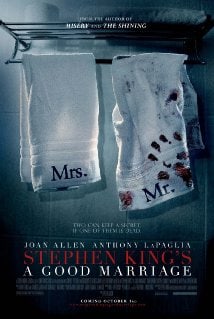 [xrr rating=2.0/5]Stephen King adaptations are about as hit and miss as you’d expect for a writer whose fiction has been turned into nearly 200 films. His level of involvement in each has also widely varied. While he famously hated what Kubrick did to his material in The Shining, he’s no stranger to penning the scripts himself or even appearing onscreen. A Good Marriage makes a point of flashing King’s name, even printing it on the movie poster in larger font than the film’s title. King wrote the screenplay himself, adapting it from one of his short stories, which makes it all the more surprising that his voice is lost underneath all the hokey, made-for-TV style trappings.

What’s most infuriating about this movie is its wasted potential. King gleaned inspiration for the original story from the murderous exploits of Wichita’s BTK Killer, Dennis Rader, who carried on the life of an upstanding family man when he wasn’t binding, torturing and killing. But a setup tailor-made for white knuckle tension mostly just fizzles under one-dimensional characters and overreliance on dream sequence fake-outs.

In place of Rader is Bob (Anthony LaPaglia), who has built an affluent and seemingly perfect life with his wife Darcy (Joan Allen). Her biggest issue with Bob is that he tends to be a little controlling—he often writes condescending notes, in one case scribbling out that she’s “put on a pound or three” and stowing it away in her candy jar. Otherwise, she’s totally unaware that their blissful empty nest has been built upon a twisted branch. During one of Bob’s convenient business trips, Darcy searches his workshop for some replacement batteries and happens upon his stash of a young woman’s ID and credit cards. Recognizing the girl as the one whose image has been splashed all over the news as the victim of a local serial killer named Beadie (instead of BTK), Darcy sees through the veil and must look upon the ugly truth.

Perhaps Darcy is meant to be simmering underneath as Bob returns and immediately discovers that she’s at long last found him out. She’s likely meant to be torn up inside as she initially agrees to let all the serial killing slide if he promises to cut it out. But we wouldn’t know it from Allen’s mostly wooden performance. Bob is somewhat menacing, manipulating Darcy into keeping quiet by invoking their grown kids, but it’s never entirely clear what motivates her to abet a serial killer (until, of course, she doesn’t). This is material that’s ripe for psychological horror, but somehow director Peter Askin can only achieve the feel of a dark soap opera. In place of conflict is contrivance. And the only time King’s fingerprints are clearly visible is near the film’s end, when Stephen Lang’s terminally ill former detective (who’s been tracking Bob for years) is thrown into the mix for heavy-handed exposition and what simply feels like running-time padding.

A Good Marriage opens with enough potential to lure in the viewer, only to unravel into a forgettable slog that does nothing but waste its potential with cardboard-cutout characters snatching tedium from the jaws of tension. The film has not been without its share of controversy, as Dennis Rader’s daughter has spoken out against what she sees as exploitation of her onetime church board president father’s victims. She’s gone on record as saying that, by basing the story off Rader, King will give her sadistic dad a “big head.” Little chance of that happening if he ever actually sees the film. A Good Marriage is a bad movie.