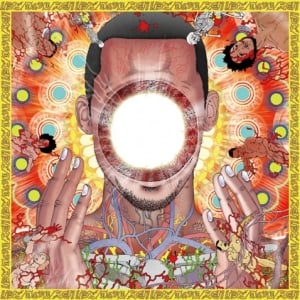 [xrr rating=4.25/5]There’s no point in saying that Steven Ellison’s latest LP as Flying Lotus, You’re Dead!, represents a creative peak, because at this stage in his career the odds are excellent that you’ll have to turn around and say the exact same thing the next time he makes an album. Every album made since FlyLo’s 2006 debut 1983 has represented, if not necessarily a qualitative leap, a massive step forward in musical ambition that either develops a facet of his ever-evolving sound or introduces a new one. With this album, Ellison doubles down on the jazz forays of 2012’s impressive but inconsistent Until the Quiet Comes, crafting a 39-minute opus of 19 songs that flow together so well that the decision by publicists to send reviewers a copy as a single MP3 file was less a wearisome anti-piracy effort than a shrewd means of putting writers the proper frame of mind.

That’s not to say that it necessarily sounds like one unified document, per se, but that the sheer range of experimentation is so wild that only the occasional intrusion of guest vocalists signals a distinct separation of structure. Opener “Theme” sounds like some hellish orchestra warming up and tuning, all overlapping noise before a stuttering, highly processed beat lurches out carrying clusters of electric piano and faint saxophone lines on its back, ferrying them across the River Styx and then dumping them into the spectral waters halfway to join in the murk of souls. These ghosts of jazz swirl around the album, occasionally piping up over drum patterns that sound both modern and vintage.

Adding to Ellison’s respect for the genre’s past, he even recruited Herbie Hancock to provide that piano. It’s hard to imagine any other producer even sampling Hancock these days, and certainly not in any context beyond his unexpected foray into pre-EDM with ‘80s hits like “Rockit.” But Hancock’s contributions here verge closer to his pioneering work in Miles Davis’ first electric outfits, his piano a cautiously exploring instrument, poking out into unknown regions with the rest of the outfit. The jazz legend only appears in earnest on “Tesla” and the jittery “Moment of Hesitation,” but his presence does more than merely lend credibility to FlyLo’s jazz aspirations; it validates what the producer is doing as an exciting new phase for the music itself.

Despite some of the big name guest stars, however, the album truly belongs to Ellison and his consolidated backing group. Thundercat long ago became such an integral part of the Flying Lotus sound that the sobriquet may as well be a band name instead of a solo identity. His basslines largely align with the distorted, stop-start guitar of “Cold Dead” but also keep the composition moving underneath all the sudden jerks in tempo and rhythm, while “Turkey Dog Coma” places his knotty progressions front and center, turning every other instrument into support for his lead. Ellison himself rarely gets a moment to himself, most notably on “Ready Err Not,” and even that gradually adds the band back into a stark beat of nearly imperceptible sub-bass and clacking snares that sound like electric woodblocks.
Nonetheless, if this is Ellison’s most collaborative album, it’s also one that prioritizes his musical guidance above all else. “Never Catch Me” has served as the album’s default single for its relatively relaxed arrangement and the presence of Kendrick Lamar, but the full impact of the song is only felt while listening to the album, where Lamar isn’t just a featured guest but entrusted with the album’s first lyrics. Seen in this light, Lamar’s contributions are to the album first, not his own showmanship. Ellison also breaks out his Captain Murphy alter-ego to rap with Snoop Dogg on “Dead Man’s Tetris,” and while it’s no longer impressive to say someone holds their own with Snoop these days, it’s a testament to how focused the LP is that he, too, is there to serve the music.

FlyLo’s current sound does not exist in a vacuum, with stylistic forebears in the trip-hop scene of the 1990s, and especially the work of d&b producer Squarepusher. Like the latter, Ellison reintroduces jazz to youth culture not in as an evergreen source of enjoyable, danceable music but as a truly dangerous, challenging art form that is revolutionary for the very reasons so many people scoff at it: its pride in musicianship, its unpredictability, its splenetic expression of personal and political grievances. In making a spaced-out concept album about the afterlife, Ellison seems dead-set on alienating any potential scene that might otherwise take him: the death theme is too earnest and curious to satisfy the darker corners of the post-dubstep scene, while the beeps, shrieks and free-jazz abandon will incur the wrath of that genre’s purists. If the artist ever truly belong to EDM at any time, he went beyond it long ago, and You’re Dead! is a definitive case for Flying Lotus as not just a producer but a composer, and one of the leading lights of contemporary American music, electronic or otherwise.