March 03, 2021
Home Features From the Vaults of Streaming Hell: Self Storage 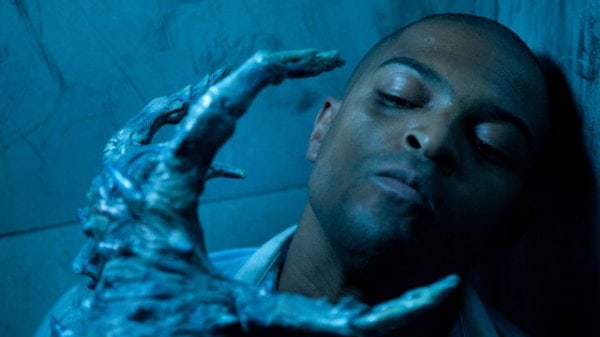 Thanks to suitably ridiculous performances by straight-to-video king Eric Roberts and ‘80s genre icon Michael Berryman, the low-budget slasher romp Self Storage is occasionally watchable. They seem to be the only cast members smart enough to gauge the quality—or lack thereof—of the material, and take obvious glee in chewing scenery, mugging for the camera and generally hamming it up. The pair are the sole bright spots that enliven this wannabe so-bad-it’s-good Z-grade mess that is never bad enough to be entertaining, irreverent or memorable.

Writer-director Tom DeNucci stars as Jake, a burned out slacker working at and living in a self-storage facility as a security guard. Jake is a stoner and a total flake who’s awful at his job. The facility’s curmudgeonly owner Walter (Roberts) hates his guts, but he gets along with his fellow security guard, the eccentric Trevor (Berryman). What Jake doesn’t know is that Walter and Trevor are a couple of malicious organ harvesters who kidnap unwitting young folk, slice them open and sell their insides for cash on the black market. Walter keeps dimwitted Jake around simply because he’s too dense to notice their operations, but this backfires when Jake learns that Walter plans to fire him. So Jake invites his best buds and a crew of buxom gals over for an afterhours party at the facilities and accidentally gasses the latest organ crop before they can go under the knife. When a powerful black market supplier (Jonathan Silverman) comes calling, Walter and Trevor are forced to go after the best resources available: Jake and his friends. 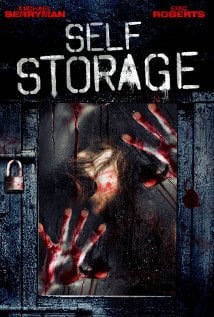 Self Storage promises a typical slasher structure, and the methodical plot indeed turns on kill scenes that follow a deliberate pace. But the film is nearly halfway finished before Trevor and Walter begin to unleash their havoc. Until then, the film consists of Jake and company’s wild partying, dealing in stupid humor and late-night Cinemax-level sex scenes set to a god-awful soundtrack of nu-metal, dubstep, and mall rap. When the action finally picks up, DeNucci toys with the film’s single irreverent touch: Trevor and Walter need their victims alive but keep accidentally killing them, and the dark humor buoys the wry wit to which the director so clearly aspires.

The film is insultingly uninventive, a one-note half-joke that has absolutely zero thematic ambition beyond its simplistic premise. It’s essentially a stoned campfire story come to life, incoherently told and nowhere near as clever as it thinks it is. When Roberts and Berryman are on screen, they remind us of better, more deliciously absurd films of this ilk they’ve worked on. It’s a testament to the film’s awfulness that this material is beneath even these second-tier actors, admired less for thespian ability than for wacky characters and poor choices in film projects.