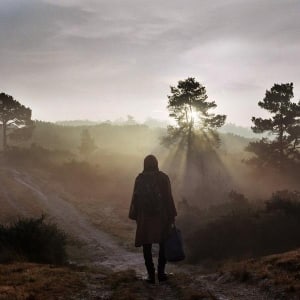 [xrr rating=3.75/5]Brighton’s Esben and the Witch released a split LP with fuzz rockers Thought Forms earlier this year, introducing the standout track “No Dog,” a song that returns with just as much impact on third full-length A New Nature. “No Dog” is a raging, abrasive rocker that rushes forward in time to a volatile salvo of drums, Rachel Davies belting along, “I am no dog/ I am a wolf/ No dog…can make me lose my footing!” Like this track, the whole of A New Nature sounds raw, primal and punishing, introducing a wide and startling gulf between the moody goth ambiance of debut LP Violet Cries and the stripped-down noise Esben and the Witch channels here.

Now recording on their own label, completely absent the omnipresent drum machine and stifling atmospherics that defined their debut, A New Nature is a very different record than anything the British trio has created thus far. The band’s past work relied heavily on a gloomy shroud that made the band immediately engaging, but also came at the expense of melody, songs bleeding together under that veil of surface-level drama. On A New Nature, Steve Albini’s trademark production highlights the notable addition of live percussion, but also forces these powerful recordings out into the open. This album still relies heavily on oppressive atmosphere—dirges of guitar, the occasional a cappella vocal, and mournful horns—to intensify the impact of inky rockers and titanic post-rock journeys into the dark. But it invokes Swans, PJ Harvey, Siouxsie and Portishead’s Third more than the gothic trappings of the first two Esben and the Witch records.

This raw sound makes A New Nature the band’s most ambitious recording to date, if not their best. At the very least, it suggests a newfound confidence in their own songwriting, one that demonstrates a willingness to condense these songs to their purest form. Opener “Press Heavenwards” and 14-minute epic “Jungle” each build slowly and transform from humble, quiet beginnings. But their various mutations all rely on Davies’ dynamic vocals (quick to soar, growl, whisper and cut), a terse ’90s guitar sound prone to shrieking feedback and muscular percussion that simultaneously pops and thunders. While Davies sounds as energized and passionate as she ever has, Daniel Copeman’s drumming is a force here, deftly flowing from scattered mid-tempo pulse to riotous explosion, and dialing back with real subtlety on quieter moments like “Wooden Star.”

While A New Nature has a tendency to feel overlong as the band’s ominous squall rises up again and again, it also feels like a tremendously vital recording from a band that previously seemed bound by its own unwavering focus on beautiful, sophisticating atmosphere. Esben and the Witch sound uneasy throughout, and whether that feral presentation is a product of Albini’s influence or is the band’s energized reaction to this newfound stylistic freedom, it’s a contagious tone that suits these midnight siren songs. A New Nature is a confident change of direction that finds the right balance between shimmering beauty, a slamming onslaught of noise and the eerie webs caught between the two.