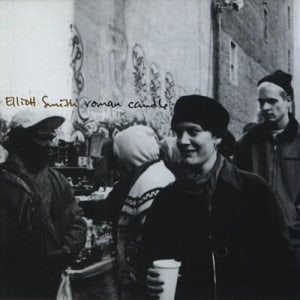 After Elliott Smith’s death in 2003, a wall on Sunset Boulevard, where L.A.’s Silver Lake blends into Los Feliz, filled with tributes. They crept over a colorful design of an auto-repair shop’s façade, featured on the cover of Smith’s Figure 8 (2000). I drove past it often, as my wife works a few blocks away and my sons started pre-school on Sunset in this relentlessly gentrifying, lucratively twee neighborhood. My sons and I watched that wall crowd with penned or scrawled flourishes. One of my boys wondered about its boldest message, left in broad black marker, way up high in a corner: “You fucking coward”.

Similar to Kurt Cobain, a fellow Northwest talent and misfit, Smith’s sudden end generated sympathy among many and anger among at least a few. At the time, Smith’s death was locally rumored a suicide, although some averred that the two stab wounds to Smith’s heart were perhaps the result of a drug deal gone wrong, rather than a self-inflicted, fatal wound. Like other entertainers already famous or not yet so, who moved to Los Angeles and then died mysteriously, Smith’s fate shrouds how we respond to his career. Listeners may find more gloom in his terse debut album, Roman Candle, than even Smith intended. Or, this half-hour may foreshadow his mortality a decade after he recorded nine songs on a four-track machine with a Radio Shack microphone, as a demo tape for Portland label Cavity Search.

These low-life attitudes, if expressed in educated form (Smith and Gust met at rarified Hampshire College), permeated Smith’s tunes. The title track opens with soft but insistent strumming. Smith sought to separate himself from Heatmiser’s roar, and the grunge glory of Seattle’s Nirvana and Soundgarden. Behind the closely-miked chord changes and muted fidelity, Smith warbles and wavers, usually troubled.

His talent arrived early, for “Condor Ave.” was written when he was 17. A livelier tune, it narrates depressing subject matter with cheerful delivery, over a spritely air. This typical, dogged juxtaposition, over even this short album, can wear an attentive listener down. Smith parades his gift for lovely guitar, as on “No Name #1”, but his refusal to ease up on downbeat narratives betrays a contrary bent. In hindsight, this slant may have hastened his separation from Heatmiser (even if Gust appears on the cover and Lash helped mix Roman Candle), given his next 10 years of heavy drinking and drugs.

The titling of four songs, and three in a row, as “No Name” nods to Smith’s willful obscurantism, his insistence on obscurity. Numbers #2 and #3 stay respectable, if less memorable: “Everyone’s gone/ Home to oblivion.” Yet, pleasant singing and graceful harmony convince a casual listener (if words retreat to the background) about Smith’s wise choice to lighten cloudier moods with sunnier melodies.

“Drive All Over Town” drags; the fourth “No Name” about a breakup finds Smith straining his voice to reach a sensitive register which, while he carries it off convincingly, may have inspired his imitators to whine and moan about the lover who left. This self-pitying atmosphere does dampen Smith’s legacy.

The titles of the final two tracks, “Last Call” and “Kiwi Maddog 20/20” (a fortified wine) allude to the alcohol-fueled concerns that haunted Smith. The first song despite its put-downs and self-hatred whirls around a more aggressive guitar, recalling Heatmiser’s ornery, if textured, songcraft. The second applies reverberation for resonance (aided by a drummer) which expands acoustic textures. Both songs anticipate his self-titled second album and his third, Either/Or (which some of his fans, me included, count as his best). Major label signing followed. Then, his music became more baroque, more pop and more Beatlesque. Smith’s characteristic songwriting continued, but studios and bigger budgets muffled the punch of his direct, honest, even if uneven first three records, which better show his dynamic range.

Smith figured these songs would lead to an offer of a seven-inch single on Cavity Search. But all were accepted and released by the label. Their lo-fi nature (a 2010 remaster tweaked its frequencies, but I have only heard the CD as released in July 1994) conveys Smith’s pain, as it applies his musical remedy.

The qualities Smith brings to these sparely played, deftly arranged, yet simply recorded tracks reveal the themes and styles that led, after two more (arguably better) albums on Kill Rock Stars, to critical acclaim and modest mainstream success. Smith was accepted by those who would too soon express their sadness on that Sunset Boulevard wall. Anyone who viewed at the 1998 Oscars his nominated ballad “Miss Misery” may remember his unease, aired all alone before a billion people. Backed by the house orchestra, he curled up into one of his characteristic expressions to loneliness. His awkward stance as he sang an abridged version of the Good Will Hunting song displayed his discomfort. Fame never fit Smith, although his reputation grew. Predictably, he lost to Celine Dion’s “My Heart Will Go On,” from Titanic.