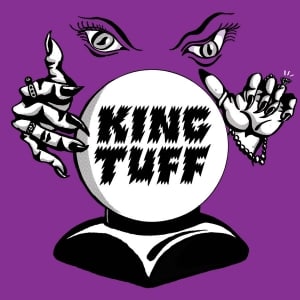 [xrr rating=3.5/5]Here’s the pitch: We’ll raise T. Rex’s Marc Bolan from the dead and partner him up with the Cramps, then polish the act to create the perfect bubblegum pop band for a Saturday morning kids’ cartoon series. Call it “So King Tuff!” What makes the act so irresistible is that Kyle Thomas, King Tuff’s alter ego, has found an ideal balance point between tongue in cheek irony, lo-fi garage glam and creep-show trappings. Thickly distorted guitars and pounding drums provide a battle-axe edge that grounds his lilting vocals and occasional forays into psychedelic excess. Or maybe it’s the other way around and arch humor and goofy lyrics keep the walls of noisy rock jams from sinking into the sludge. Either way, the combination results in an intense but fun listening experience, where the songs themselves aren’t necessarily that impressive, but they’re thoroughly entertaining. For example, “Headbanger” follows its croaking, demonic intro with tight, eighth note chunks of guitar just to set up the poppy, teenage love song lyrics, “Me and you, we got a true connection/ I knew it when I saw your record collection.” A shared love of Black Sabbath and Judas Priest is all the sign King Tuff needs to recognize his soulmate. The smooth, pop hook chorus repetition, “Bang your little head,” is propelled by a metalloid guitar riff that summons a sweet tang of cognitive dissonance. It’s simultaneously fluffy and visceral, and it’s also completely silly. With lines like,”Shaking off our clothes on the grave, where rock and roll was buried/ Making out to ‘Make Me Shout,’ in the back of a cemetery,” it’s impossible to take it seriously. Except the music is so compelling…

Of course, King Tuff doesn’t jump straight to the punch line. Black Moon spell opens with a run of less campy tracks. First, the title tune includes a solid instrumental section that establishes his hard rock credentials. Then he tosses out a low budget, entry level rocker and some acid-soaked garage psychedelia to soften the listeners so “Headbangers” will hit all the harder. That sensibility rescues the album from pure parody; King Tuff has the discipline to tone down the wink and nod for enough of the songs so that when he drops the subtlety, the listener is primed for it. It also helps that the oddball songs don’t follow a strict formula. On the one hand, “I Love You Ugly” sounds like a T. Rex interpretation of Tuff Darts’ “(Your Love Is Like) Nuclear Waste” that bleeds off all of the bile to leave behind a residue of simple non-judgmental love and left-handed compliments. By contrast, the raw rocker “Madness” leads with a ridiculous boast, “King Tuff is my name/ I got madness in my brain/ Pleased to meet ya/ I’m gonna eat ya/ Cause I’m batshit insane,” which turns out to be his idea of a pickup line.

While the humor forms the core of Black Moon Spell‘s attraction, the camouflage tunes have their appeal as well. Probably the best track on the album is “Black Holes In Stereo,” which cleverly repurposes record album spindle holes as a pathway to transcendence. The verses are wordy, backed with a poppy, up-tempo beat, but the chorus kicks it into overdrive with a single line mission statement, “There’s a black hole on your stereo/ And all you gotta do is go, go, go…” The echoed mayhem of that last word repeats like stars slipping away from a rocket hitting warp speed.

Near the end of the album, King Tuff loses some of his focus with a couple of sun-dappled psychedelic tunes that call back to his earlier releases, but don’t quite fit here, despite being quite pleasant. He also chose to close out the record with a straight ahead retro rocker rather than going for the laugh one last time. Regardless, the essentially weird mix on the album isn’t diminished by either of these decisions. If this were a cartoon, I’d be tuning in just to see where King Tuff would go next.