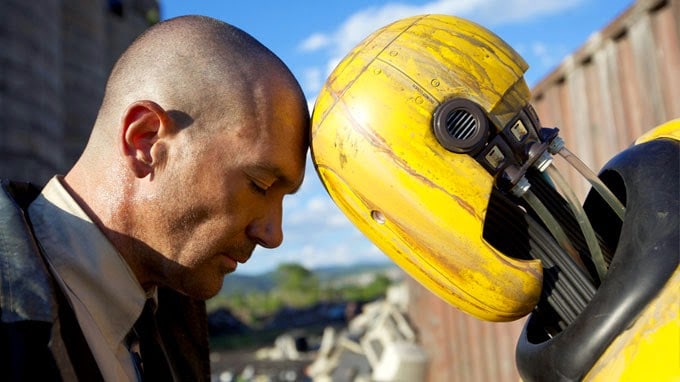 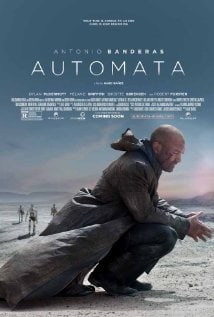 The machines will take over in 2045. According to some futurists, that’s the year that artificial intelligence will exceed human cognition. This will bring an end to society as we know it in an event described as the technological singularity. Such an earth-shattering event does not factor into Gabe Ibáñez’s Autómata, however, because the Sun beat the robots to it. In this not-too-distant future, solar storms killed off 99.7% of the world’s population. The 21 million survivors are cloistered away in cities protected from the encroaching global desert by mechanical clouds. Robots called Pilgrims were invented to do necessary work in the radioactive wasteland, but their efforts to stave off an arid apocalypse were largely unsuccessful. Instead, they’ve been relegated to domestic servant roles and otherwise viewed as pariahs.

Though society is breaking down, it still clings to life. Jobs like “insurance agent” still exist. Jacq (Antonio Banderas) has such a job and goes around making sure no Pilgrim robots have caused any damage to humans. After all, as the film mentions ad nauseam, automata are bound to two protocols: to not cause harm to humans and to not alter themselves. It’s the second protocol that the film is most concerned with, since alteration to their makeup (which limits their intelligence to avoid an event like the technological singularity) would most likely render the first protocol moot.

Things begin to go haywire when Jacq meets up with Dra. Dupre (Melanie Griffith). She is studying a sex robot named Cleo (also voice acted by Griffith) that is capable of repairing herself, thereby violating the second protocol. Hell breaks loose for cryptic reasons and Jacq (whose wife is within days of giving birth) finds himself in the radioactive desert, dragged along to a revolutionary outpost by rogue automata compelled to nurse him to health.

There’s a lot to like about Autómata. The post-apocalyptic world it creates is intriguing and the rudimentary androids are refreshingly retro compared to most modern-day cinematic robots. While much of the technological regression caused by the solar storms doesn’t quite make sense, there’s something fun about seeing a world where skyscraper-tall dancing holograms coexist with dot matrix printers. And there’s a novelty in seeing recently-separated spouses Banderas and Griffith sit across a table from each other, but both are overly prone to robotic acting — and Griffith’s face has obviously undergone a good deal of maintenance.

A visually compelling film, Autómata fails in its philosophy. Hearing Griffith over-explain why robots’ intelligence must be limited is a borderline insult to anyone who has ever seen a sci-fi film before. The film errs in getting overly concerned with a robot’s consciousness when movies like Steven Spielberg’s A.I. have already long-ago excelled at rendering such a conundrum. Asimov would be turning over in his grave if he knew how 70-plus years after his Three Laws of Robotics became a sci-fi standard, they still had to be explained in-depth within an otherwise competent film about artificial intelligence. This movie keeps the viewer engaged throughout, though too often that involves scoffing at the over-explanation and occasionally groan-worthy acting and writing. Autómata doesn’t cause any artistic harm, but could’ve probably benefited from the ability to alter itself.