January 28, 2021
Home Music Iceage: Plowing Into the Field of Love 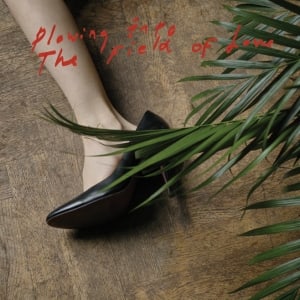 [xrr rating=4.5/5]Birthed by Copenhagen punk scenes that had yet to see large-scale export, Iceage came into this world in a manner none done proper justice by the idiom “kicking and screaming.” They seethed, picked fights and gnashed their teeth so effectively that basically overnight they’d convinced the internet they were the most legitimate thing to bear the handle “punk” in years. Even the moves that looked superficially obvious to U.S. and U.K. audiences (flirting with fascist imagery was shocking when Siouxsie did it but was definitively spoiled by Marilyn Manson) provoked genuine ire in Denmark and bore the rapidly developing Iceage mythology further aloft. Some of the band members were still teenagers when the instant-classic debut LP New Brigade hit stateside, but they’d gotten everything right on the first widely publicized try, and airtight to (combat) boot – from their visual brand identity, instantaneously cemented by an unforgettable logo, to, of course, their music, a brutally martial black hole that sucked up hardcore, post-punk, black metal, noise and no wave and lit it all on fire. All clenched fists, New Brigade boasted music harsh and monumental enough to justify their band name but also livid and incendiary enough to make the name seem deliberately incongruous. Over the three years that followed, Iceage have made a vibrant career out of untying those first knotty compositions; a highly disciplined group of musicians, they’ve been out to prove that brief and dense isn’t the only way to do taut and fierce – that “punk rock” as it’s most narrowly understood isn’t the only way to make punk rock. The centerpiece of their magnificent sophomore album, 2013’s You’re Nothing, was an honest-to-god piano-led ballad called “Morals” that climaxed with Elias Rønnenfelt wailing, “Where are your morals?” There aren’t a lot of punk bands that would risk as song like “Morals,” but then, Iceage aren’t your typical genre exercise, and they seem uncommonly drawn to high-risk aesthetic situations.

Case in point: the title of LP3 Plowing Into the Field of Love might read as a declaration of destructive cynicism, which unlike those more forthrightly political fascist salutes reads as a tired shrug in the chronology of post-punk no matter what country you live in. Maybe it’s Iceage’s announcement of the emotional territory they intend to cover. Plowing is a violent gesture, but a necessary one. It’s not destructive. They’re not, like, “salting” the field of love, you know? Anyone can do blank, casual nihilism, especially if they’ve got loud electric guitars. That seems easy compared with the thing Iceage – and, excitingly, a suddenly increasing range of equally gifted peers including recent noisemakers like Perfect Pussy, Savages and White Lung – attempt and pull off. It’s music that trembles with fury but also with the full force of a whole range of other emotions, to which it grants equal legitimacy. Iceage don’t fire at random, they take careful aim and mean it when they strike. This approach demands human generosity and intellectual rigor, which might not be apparent if you skipped over “Morals” to get to the good stuff – or, worse, took it as an ironic piss-take on the idea of sentimentality. When Iceage get all sincere, you pay attention, just like you do when they get mean. It’s all coming from the same place. I’m not claiming that Iceage opened up their initially rigid sonic palette to moony-eyed piano, mariachi horns, film-score strings, and traditional country music because they wanted to sound specifically like Nick Cave, but the similarity will probably help a lot of folks figure out how to deal with Plowing Into the Field of Love. For we’ve learned to take Cave seriously whether he’s coming on to us as Grinderman, lunging for our jugulars in the Birthday Party, or pining for the love he lost on any given ballad with the Bad Seeds, because he so openly takes all of those emotional responses seriously. Iceage take us seriously, too, in all our many contradictory dimensions; oughtn’t we extend them the same honor?

On Plowing Into the Field of Love, Iceage even gets to joke around – check the carousing that goes down in simultaneously the oh-so-silly yet deadly solemn video for first single “The Lord’s Favorite,” a jittery desert storm of a country song, indeed a straight-up Gun Club homage. That’s fine, just fine, because it sounds great and because they band means it. This may be the group’s loosest record to date, aesthetically and atmospherically, but it mostly just reframes or recontextualizes their endless reserve of focus and intensity. After all, looseness is a matter of integrated negative space, and. the songs here do expand into the black vacuum that engulfed New Brigade and You’re Nothing. That does not require the band to relax, however – sometimes, the incredible Johan Wieth plays acoustic guitars instead of electric ones, and sometimes they sound twangy, but that doesn’t make the countryified breakdown of the stony anthem “Simony” any less riveting or pummeling. The expansion does allow Iceage to fully integrate a broader range of instruments and stylistic gestures, from the grand, trumpet-led climax of the ominous “Forever” to the lovely piano melody that’s actually the glue holding the seasick, sprawling slowdance “Against the Moon” together.

The change in approach also means it’s easier than ever before to understand what Elias Rønnenfelt is singing (or trying to sing – Rønnenfelt’s lack of tunefulness is one of Iceage’s calling cards), and he hold up admirably under the scrutiny. Lyrically, Plowing Into the Field of Love is as absorbing and challenging as any other aspect of the record, awash in memorable, lunar images. “One hundred Euro wine…five-inch white high heels,” the lines that anchor the drunken chorus of “The Lord’s Favorite,” are destined to be Iceage’s most-bellowed, but what exactly are they doing in the song? Is it a joke, and if it’s a joke, what is its nature? Does it merely signify the goofy antics of the 22-year-old singer, or is it satire? Who is the target? Do Iceage include themselves in the targeted group? Why are the high heels white? Rønnenfelt’s lyrics may not be the most literary, but they’re also not just the brute expressions of some punk kid rattling off morbid imagery – “hearse, hearse, hearse, hearse, hearse” goes the final line of the album – to rile up a basement crowd. There are no meaningless or casual signifiers in Iceage songs; the hearse is never empty; there is always a beating heart inside, and they know that it’s precious.