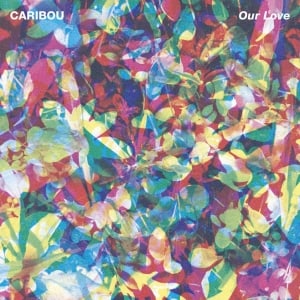 [xrr rating=4.25/5]“[T]he primary impulse on this record was to make something that was generous in the sense that it was for everybody, not just for me locked in a studio by myself,” remarked Dan Snaith (better known internationally as Caribou) during press meet-ups leading into the release of his seventh studio album, Our Love. While the statement wouldn’t have made any waves coming from the lips of perennial Top 40 chart topper, the notion of an easily digestible Caribou album left many Snaith fans perplexed. It’s not as if his previous work had been jarring, but even the indie-pop that pulsed through 2008 Polaris Music Prize winner Andorra took a decent level of patience, and a keen ear for subtle sonic oddities, to truly appreciate.

This intent on creating a pop masterpiece comes on the heels (albeit a few years removed) of the funky patchwork of Jiaolong — the first release for Snaith through his Daphni moniker. During the creative process of that release, Snaith transformed into a mad scientist of samples, challenging the likes of Cut Chemist, Daedelus, Austin’s Exploded Drawing collective and DJ Shadow for crate digging domination. Taking a moment to escape from the emotive through-line of his early works, Jiaolong is an album meant for left-field clubland, thus segmenting the diverse base that Snaith had been inspiring since the turn of the 21st century. Our Love is still tainted with the hedonism of illicit after-hours affairs; the language is just translated for all to enjoy.

During a month that saw future-leaning, guest-heavy releases by SBTRKT and Flying Lotus, there was true risk involved with Snaith admittedly producing an electronic album refined for popular approval. A consummate artist, Snaith hasn’t simply kowtowed to trending soundscapes and big room aesthetics, he has just turned down the noise in an attempt to usher fans of big room bangers into the realm of poetic electronica. And as Disclosure did in 2013 with Settle, Snaith is making an indelible mark on the pop dial with Our Love.

Like the brothers Lawrence, Snaith does explore a fascination with reformulating favorite underground UK dance sounds. Album opener “Can’t Do Without You” commences with a slow-building garage melody, an energy that reaches spiraling heights during the jittery “Julia Brightly” and “Your Love Will Set You Free.” It is then the twisting, elongated basslines of post-dubstep that serve as the platform for the tortured echoes of “All I Ever Need.” But these are not copy-and-paste exercises in production software (as many tech-house contemporaries construct tracks), each line is forever tagged with that unique Snaith fingerprint. A mark that is both weightless and innocent yet anxiously psychedelic. As an example, even when the downbeat hits you continually square in the heart, it’s damn near impossible not to get lost in the chill-wave fog of “Silver.”

Love is universal, but one quickly realizes, it is not always easy to accept, reason or share. Our Love embodies similar characteristics. While some will experience love at first listen, the album’s 10 tracks do contain something for nearly everyone if he/she offers ample time to acknowledge and appreciate its quirks.