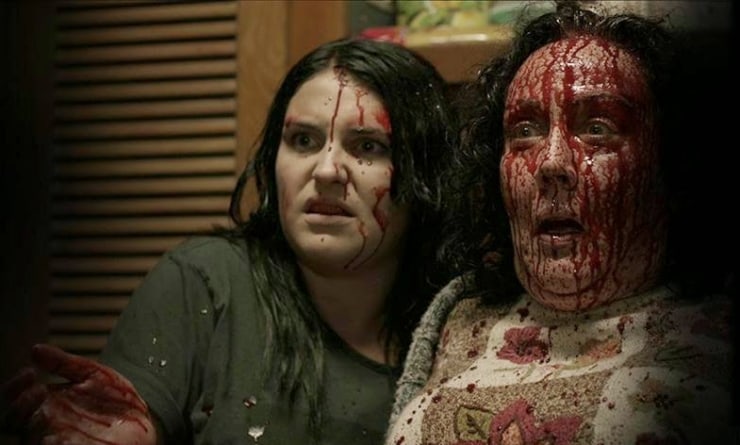 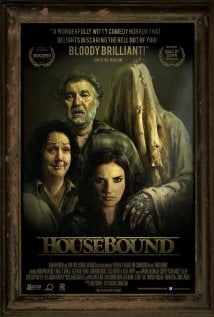 There may be no fixture of fear in our collective mind greater than the haunted house. We tell stories about them as children, we build fake haunted houses in carnivals and we feature them in movies, to the point where the haunted house is as pervasive as a fear of serial killers or that dream where your teeth fall out and chase you. But all haunted houses have a distinct similarity: they are places you can escape from, or at least try to. Housebound, the debut feature film of New Zealand filmmaker Gerard Johnstone, at least brings a novel hook to the table, in that its protagonist literally cannot leave the premises by legal decree.

Housebound functions as much as an extremely dry comedy as it does a horror movie, but the premise is as direct as you can get: Kylie Bucknell (Morgana O’Reilly) is a petty criminal, first introduced unsuccessfully attempting to rob an ATM. Rather than go to prison or rehab, she is sentenced by a creative judge to house arrest at her childhood home, in an effort to provide “stability” for a recidivist meth abuser. Even if supernatural elements didn’t factor in later, the thought of being confined by an ankle bracelet in the home she tried so hard to escape as a kid is probably horror enough. It becomes apparent that Kylie’s talkative, obtuse mother (Rima Te Wiata) believes the house is haunted, and while Kylie scoffs off the claims at first, spooky things begin to occur.

Johnstone lets sullen silence do most of the heavy lifting early in the film; Kylie’s slovenly habits act as a good marker for how we easily slip back into adolescence (though it seems likely she didn’t need much impetus there). In particular, Housebound gets across the stifling atmosphere of two people linked by genetics but lacking in any other common ground astonishingly well; neither Kylie nor her mother come off as particularly sympathetic, but it’s easy to buy them as related. O’Reilly plays Kylie as, in fact, a wholly unsympathetic heroine, which is an inspired touch; initially, there’s no real reason to root for her at all, which actually makes one root for whatever potentially vengeful ghosts might be lurking.

Housebound does overload its plot, adding in serial killers, spooky former psychiatric institutes, a gun-wielding hillbilly neighbor and more into the basic haunted house scenario. The horror aspect of the film is largely successful, if a bit reliant on jump scares, but the vein of weird humor is what really makes the film unique. Understated touches like a murderer taking the time to put on safety goggles before wielding a power saw are nearly background elements, yet make Housebound more than just a parody. For a first effort, Housebound is surprisingly effective, even if it only reinvigorates the most universal tropes.