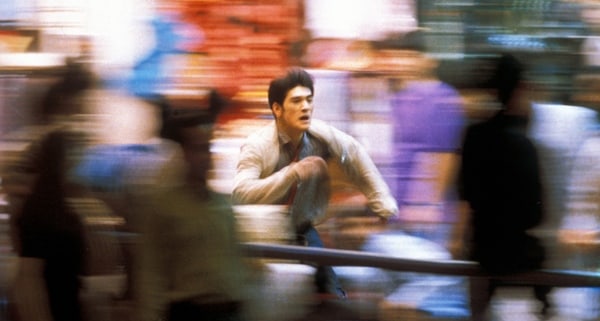 My older brother deserves all the credit for introducing me to Asian cinema. Sure, I had seen some random kung fu movies, but I had never been exposed to contemporary Asian cinema before. And it all started with Wong Kar-Wai’s Chungking Express. The video store (yes, this was back when those existed) had a copy, and he decided to rent it simply because he had heard it was good. The first time I watched it, I was in a state of pure awe. Not only was this a new international experience, but I had never seen a film like Chungking Express. The frenetic camerawork. The merging of two stories into one. Thanks to Wong Kar-Wai, I saw a brave new world of intoxicatingly stylish filmmaking for the first time.

What is so immediately striking about Chungking Express is Wong Kar-Wai’s ability to spin tales of pure loneliness and isolation in a setting so claustrophobically overcrowded as metropolitan Hong Kong. The city is all neon lights, blaring car horns and people packed tighter than sardines. If the camera meandered more, we may have had trouble distinguishing the film’s central characters. But our attention is quickly pointed toward the Midnight Express, a food stall like any other in Hong Kong, which becomes the converging point of Wong’s separate but thematically intertwined stories.

In both stories, a jilted cop obsesses over his girlfriend and inadvertently finds new love. Cop #223 (Takeshi Kaneshiro) and his torturous heartbroken state claims the first half of the film. He sets an ultimatum for himself in an effort to move on from his former girlfriend, May, while conveniently drawing out the process. Every day, he buys a can of pineapple with a sell-by date of May 1. If his ex doesn’t change her mind by the end of the month, their love (and all that pineapple) will officially expire. May 1st also happens to be his 25th birthday. Thankfully, Cop #223 does actively try to find someone new to encourage his emotional recovery; he isn’t that delusional. But former girlfriends and classmates are a shot in the dark, and he has better luck chatting up a drug smuggler wearing a conspicuous blond wing and sunglasses. 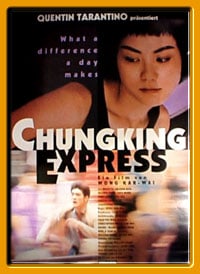 Despite Cop #223’s preoccupation with time and his willingness to pass it slowly, his life is filmed at a breakneck speed. Wong and cinematographer Christopher Doyle almost exclusively use hand-held cameras, and the film’s imagery is perpetually blurred, their protagonist blending into the Hong Kong crowds. Wong balances this fast-paced story with the dreamy languor of Cop #663 (Tony Leung), the doe-eyed cop stuck in a rut (now regularly talking to dishtowels) after his flight attendant girlfriend dumps him. The only tangible connection between these two cops is the Midnight Express and the pixie waitress Faye (Faye Wong). In this story, Faye is the hopeless romantic, taking it upon herself to literally rearrange Cop #663’s entire life starting with his tiny flat.

Especially in this second section, Chungking Express adopts a decidedly avant-garde style, and the influence of Jean-Luc Godard is unmistakable throughout the film. Not only was the film shot in just three months, but many scenes have that improvisational feel typical of the French New Wave. And like many of Godard’s films which cast pop stars as actors, Wong cast pop music idols Takeshi Kaneshiro and Faye Wong. The story itself hardly bothers with plot and instead boils down to a series of scenes with Faye cleaning the flat and singing along to “California Dreamin.’” Let loose on the proceedings, she turns everything into a pixie wonderland and steals the movie. And her “relationship” with Cop #663 is the classic contrast of introvert and extrovert. Her personality is so enormous it seeps into other lives. Her oblivious cop is so lost in his soul-searching that he can’t even notice when items are moved and replaced daily.

There is a clear line dividing and simultaneously uniting the first and second halves in terms of style. Where Cop #223’s frenetic world is all a blur of restless hand-held camerawork, Cop #663 is still in a sea of never-ending action. Shots are frequently blurred but not because of Cop #663’s ceaseless motion. Instead, he is so complacent, silently sipping coffee at the Midnight Express that the world seems to speed past him. Both sections are highlighted with moody blue hues, but it’s the difference between anxious longing and quiet reticence.

I can pinpoint the films that made me the film buff I am, and the moments that rekindled my love of cinema all over again. My first viewing of The 400 Blows. Viewings one through fifty (and counting) of Howard Hawks’ The Big Sleep. Chungking Express has a place of honor alongside those films that make me love cinema and made Wong Kar-Wai, with his inability to disappoint, one of my all-time favorite directors. Twenty years on, Wong Kar-Wai alternates between action films and contemplative pieces more akin to Chungking Express and its follow-up Fallen Angels. But none have revisited the boundless joy that is captured – if however briefly – by Faye Wong in Chungking Express.