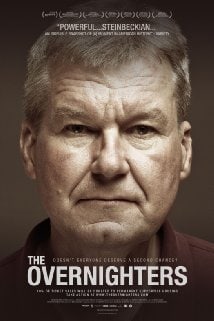 [xrr rating=2.75/5]I live next to a park in Portland, Oregon, where homeless folks camp out, sometimes feet from my doorstep. There aren’t too many problems, except for the occasional screaming fight, abandoned shopping cart or petty theft from my porch. It astounds me that we live in a country with so much wealth while many of its citizens are doomed to sleep on the street. But part of me wants them out of sight. Jesse Moss’ documentary, The Overnighters, examines that conundrum: whether there is any room left in our society for charity, any tolerance for those without homes.

The Overnighters focuses on Jay Reinke, a pastor in Williston, North Dakota, a small town that has drawn scores of men looking for work after fracking has opened up new oil fields nearby. Reinke opened his church up so those without homes have somewhere to sleep at night, the so-called “overnighters” of the film’s title. Moss goes to great pains to show that many of these men are simply down-on-their-luck laborers trying to catch a break. However, the overnighter program also attracts convicted felons, including sex offenders, much to the chagrin of the people who live in Williston.

Much of the film follows Reinke as he desperately tries to keep his program alive. Moss frames the embattled pastor in a fair portrait, a man who tries to leverage his faith in mankind with the growing ire of the community. Reinke understands that his motivations may be fueled by pride, but he is also concerned about the fates of the men if the community casts them out into the cold with nowhere to go. The pastor is obviously compassionate and well spoken, but he is also an emotional wreck, growing increasingly desperate as the community threatens to close his program. The 90 minutes we spend with this man are uncomfortable, especially by the time his fate is revealed in the closing frames.

In many ways, the other men who populate The Overnighters are more compelling than the pastor. Their journeys have more emotional resonance, particularly as they begin to crumble towards the film’s end. A meth addict relapses after he is exiled from the program. A recovering drug addict breaks down in front of Reinke. A father, finally seeing his financial fortune turn for the better, leaves Williston because he fears he is losing his wife and daughter. Each of these stories is topical and heartbreaking.

Although The Overnighters runs only 90 minutes, it feels much longer than that. There are too many Reinke soliloquies where he is trying to justify his overnighters program, even at the expense of time with his family. Some of the footage feels staged, and Reinke’s final confession at the end of the film seems false. If The Overnighters succeeds anywhere, it puts a human face on an important issue. Though Reinke’s heart is in the right place, the problem is too big for him to fix on his own.