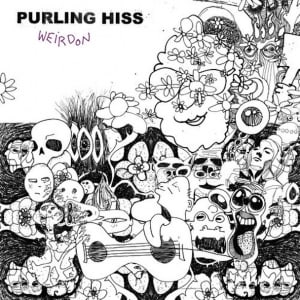 [xrr rating=4.25/5]If you were about to give up on the possibilities of good old guitar rock, Purling Hiss has a new record that may renew your faith in what six strings and an amplifier can do. Mike Polizze’s heavy sound grounds Weirdon, a punk-pop album that marries shredding with great hooks.

Polizze began Purling Hiss as a solo project, and his early recordings under that name, some of which were reissued on the Drag City album Dizzy Polizzy, feature sludge-heavy psychedelia and lo-fi sonics. But the sludge doesn’t hide Polizze’s melodic gift as a songwriter, and his pop voice reaches a mature, hummable peak on Weirdon. Last year’s Water on Mars moved on from lo-fi roots with a combination of grungy headbangers like “Lolita” and melodic tracks like “She Calms Me Down,” and in a sense Weirdon follows that model. Fans may wonder what happened to the shaggy dog heavy sludge of early Purling Hiss, and the heavy din that Polizze practiced as part of the Philadelphia-based Birds of Maya, but he offers something even better this time: an album full of great riffs and solid songs.

Weirdon is a great guitar album and a pretty good tambourine album. Those instrumental touches mark this record as a delicate alchemy of distortion and melody that balances shredding guitar and radio-friendly hooks. The album begins with the kind of sound old fans may yearn for: feedback. But “Forcefield of Solitude” uses that guitar skronk as the basis for a hummable pop-punk cruncher that buzzes and even chimes. “I turn down the radio,” Polizze repeats on a track about driving on I-95 that would sound great on the radio. The hooks don’t stop. “Sundance Saloon Boogie” sounds like a forgotten piece of 1977 British punk. “Learning Slowly” opens with an infectious riff that drives a pop chorus and hip-shaking tambourine. It would be a perfect three-minute garage band single, but at five minutes the track opens up for some FM radio guitar. “Another Silvermoon” turns down the volume slightly at first but expands the trio format, gradually layering nine guitar tracks that build to a thrilling sonic climax. Then the album goes acoustic on “Reptil-A-Genda,” landing with a stinging guitar solo. That’s just the first side, a sequence of guitar-based hard rock that never lets up.

The B-side doesn’t quite sustain that momentum, but there isn’t a bad cut on the album. Weirdon is full of uncomplicated pop hooks like those A-side riffs, the simple “uh-oh” chorus of “Aging Faces” and the pop fragment “Airwaves.” But as often as not, those hooks provide a showcase for Polizze’s guitar, as in the eight-minute epic “Six Ways to Sunday” that closes the album.

The weirdest thing about Weirdon is its cover, a cartoonish illustration by Polizze that looks like an ambitious gallery of threatening characters out of an acid trip. But there are also plenty of flowers. Jason Meagher of Black Dirt studios co-produced the record with Polizze, and together they’ve taken the basic and heavy elements of hard rock, pushed noise and melody to ideal proportions, and come up with something loud and kind of beautiful.