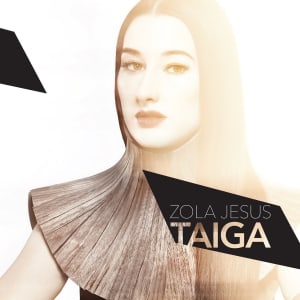 [xrr rating=3.0/5]Zola Jesus (Nika Roza Danilova) has released music almost non-stop since 2009. Back then, her apartment served as her recording studio, and her sound was understandably lo-fi. As she has made a name for herself, Danilova has been able to move her recording sessions into proper studios, and her sound has evolved into a tantalizing blend of electronic synthpop, industrial and ambient styles. Now on her fifth full-length album (counting 2013’s Versions), Danilova aims for more widespread appeal by combining her experimental side with electro-dance-pop sensibilities.

Taiga marks a potentially major change for Danilova. This is the first album not released on the Sacred Bones record label. Instead, Danilova has shifted to Mute, and takes good advantage of the additional resources. Co-produced by Danilova and Dean Hurley, the album is a sleek and dynamic attempt to couple Danilova’s broodiness with R&B beats and more accessible lyrics to create radio-ready dance music. Danilova’s powerful voice is front and center, but instead of battling feedback, she is up against big hooks and new sonic flourishes.

Mood is the biggest difference between Taiga and her previous albums. The haunting quality of much of her earlier work is still present, but it’s less apparent when watered down with dance beats. “Dangerous Days” was the album’s first single and, as Danilova made explicitly clear, is not representative of the album as a whole. As an introduction, the track is almost uncharacteristic of Danilova. While her vocal is fairly subdued throughout, once the chorus hits, she lets loose. The first sign of great hooks to come, the track is Zola Jesus’s best shot at radio pop. The clubbier “Hunger” is the track Danilova characterized as the theme of the record. Its marching band regimented synths balance well with her defiant lyrics, and next to “Dangerous Days,” it has the broadest appeal. “Lawless” is more subdued electronica that fails to capitalize on its initial buildup, but shows Danilova’s attempt at middle-road lyrics that might reel in the pop contingent.

Despite the upbeat tone of these tracks, Danilova’s vocals are consistently languid, and for the most part, she doesn’t use her operatic range fully. That isn’t necessarily a negative, but it is disappointing that she has not mined lyrics and musical cues for their full emotional impact. Title track “Taiga” and the haunting “Ego” showcase a more traditional Zola Jesus and her gut-wrenching vocal. Dramatic to a fault, “Taiga” establishes a primal atmosphere for the entire album with the help of resounding horns and layer upon layer of brooding vocals. Rapidly establishing a striking ambiance, “Ego” is the shortest track, but packs a significant punch. Similarly, “Go (Blank Sea)” begins with a steady R&B beat and erupts into a chorus of swinging vocals with Danilova forcing out her words. While the lyrics “I go downtown/ Where they don’t know my name,” are as bland as can be, Danilova’s vocal sounds as if she is practicing her scales, and makes it more engaging than it may deserve.

Taiga proves once again that Danilova is not afraid to experiment, but its Pop production adds to the Zola Jesus tradition. It’s now just a matter of balancing pop elements with her signature style. Individual tracks like “Hollow” and “Ego” make an immediate impact. But the explicitly pop fare is somewhat disjointed, and not up to the anthemic standards of her previous albums. The desire for more wide appeal is understandable, but Taiga feels like a step backward.