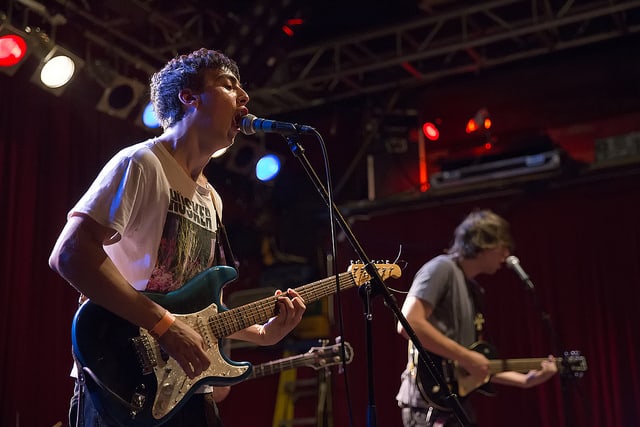 Last Friday, Chicago’s up-and-coming punk act Twin Peaks headlined a triple bill at the Masquerade’s Purgatory room, a fitting location for a band that seems to be on the precipice of a breakout after second LP, Wild Onion, saw them expanding their brash sound. For the Atlanta gig, Twin Peaks tapped local group Minor Miracles as the night’s opener. Playing mid-tempo indie brooders with splashes of electronics for flavor, Minor Miracles were the odd man out on this card, an issue only exacerbated by frontman Mike Lowery’s self-conscious stage banter. Their remove was frustrating, and when Lowery introduced a song named “Quarter to Three,” my mind wandered to thoughts of the old, manic closer from Bruce Springsteen, only to later get an actual Springsteen cover in the form of a tired rendition of “Dancing in the Dark.” This is the sort of group that invites polite applause over pogoing, and it was an odd choice to set the attitude for the night, made worse by the fact that they took about half the locals with them when they got off.

Things changed once Tweens walked on stage, however. A quick note about the sound systems and layouts at the Masquerade: by objective standards, they are wanting. Its rooms, even the 200-ish-capacity Purgatory, are spread out in such a way that even a well-attended show looks anemic, and a modest turnout like this one can seem positively barren. The speakers prioritize guitar wash first, then bass and drums and finally vocals somewhere below the ambient sound of the bartender clinking glasses at the other end of the room. In other words, for a certain kind of raucous band, it’s perfect. Tweens fit the place like a glove.

Trying to sort out which songs were being played proved difficult, with Bridget Battle’s lyrics lost in a maelstrom of barked screams and guitar patterns reduced to their most basic elements of noise. They played for a full two or three minutes before I could make out a single line, which came in the form of the sudden, bracing clarity of Battle barking “I wanna fuck you!” before launching back into the frenzy. Of course, the whole point of seeing a scuzzed-out group in a tiny room is for the energy, not the specificity of composition, and despite playing to a mostly empty venue populated by young fans who looked as if they were attending their first or second rock gig, Tweens played like they were still touring with the Breeders. They didn’t make sure that Battle’s lyrics of being fitfully bored by everything—cities, dead-end places, preening boys—were heard, they lived them out in aggro pandemonium. Still, there is sophistication here: Battle’s thrashing routine set the mood, but Jerri Queen’s head-banging drums and Peyton Copes’ dancing basslines filled out the sound, offering a reminder that simplicity is not necessarily simple-mindedness. It was hard, at times, to remember that Tweens weren’t the main act. When they dedicated set-closer “Be Mean” (Battle’s insistent lament that nice boys cut loose) to Twin Peaks, it seemed a playful but nonetheless valid challenge.

As if responding to that gauntlet, Twin Peaks stressed their blunter side with their set. Wild Onion augmented the band’s budding chops with psychedelia and other nuggets of throwback garage, but nuance was thrown to the wind for this set, replaced by straight-ahead, reverb-soaked basement rock akin to their debut mini-LP, Sunken. Standout cuts like “Strawberry Smoothie” and “Flavor” were blown apart by sheer volume and put back together as one big invocation to join in the party. “This is another song about weed and beer,” announced singer-guitarist Cadien Lake James before launching into yet another blissed-out wall of fuzz, in a perfect encapsulation of the band’s lyrical charms and the general sonic theme of the night. Even some of the band’s slower numbers, like Sunken highlight “Irene,” got punched up to the point of being scarcely distinguishable from their punkiest tunes.

Given the band’s rapidly escalating profile, it was surprising to see them play to a crowd of no more than 30. The quartet devoted a great deal of the set to encouraging those in attendance to try to dance around a little, falling into the crowd and making goofy faces and arguably providing more emotional support for the fans than the fans did them. However Tweens and Twin Peaks may have felt about the muted audience, it was, in a way, a treat to see them in this context. There are no guarantees in this business, but with Tweens scoring some prime support slots and Twin Peaks winning more and more fans, this felt like one last chance to see these bands at their earliest stages, playing their hearts out to an appreciative but tepid crowd of glorified stragglers. Twin Peaks even managed to get everyone moving around by the end of their set, a feat that, in the moment, seemed as significant a victory as walking away from this year’s Pitchfork Festival as one of its most hyped performers.