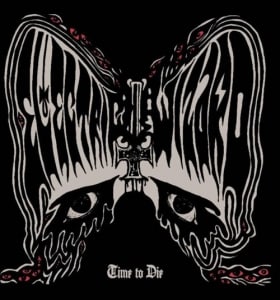 [xrr rating=4.25/5]UK doomsmiths Electric Wizard have been described as “the heaviest band in the world,” and their newest full-length, Time to Die, will do nothing to undermine that. The Dorset-based trio/quartet have specialized in thick, gloppy but surprisingly groove-laden doom ever since their 1995 self-titled debut, and with a few nods to variety have been plowing this corpse-strewn furrow ever since. Their newest offering sees them touch up-on the usual subjects—death, Satanism, death, ritual sacrifice, a bit of nasty sex, death, and also death—with the expected smear of murky guitars, anguished vocals, sludgy tempos and bursts or tortured lead guitar. It ain’t exactly a bucket of fun times, and you’ll probably want to keep your grandma as far away as possible, but for fans of dirge-like heavy doom, this album is—well, not exactly Heaven-sent, but you know what I mean.

The bad times start right away, with monster opening track “Incense for the Damned” trading in heavier-than-heavy riffage and a spoken-word news-report intro detailing the death of a Satan-worshipping teenager. (This bit of reportage will show up repeatedly throughout the album.) The tune stretches for an impressive eleven minutes, which will be no surprise to fans, as long workouts are common for this band; although the tempo and groove remain consistent, the song does have a number of discrete parts, such as the rousing chant toward then end: “I wanna get high before I die.”

Follow-up tune “Time to Die” is equally bleak, and equally muddy in sonics, with heavily-distorted guitars and bass creating a sonic whirlwind from which occasional snatches of lyrics or lead guitar stand out. “I Am Nothing” follows on with its own twelve minutes of staring into the void, a tune that slows things down a little bit and brings an extended sonic collage into the mix. It’s not exactly Close to the Edge-era Yes, but it’s evidence that Electric Wizard understands a truth that sometimes eludes many of their doomy brethren: that no matter how heavy the riffs, it takes more than repetitive, droning distortion to maintain listener interest over the course of al album, or even a song.

And so it goes, slowly. The rest of the album is pretty of a piece with this opening trifecta of tunes (which have already consumed more than 30 minutes of the listener’s life). “Funeral of Your Mind” is practically peppy compared to what has come before, with a snappy guitar line and, well, spirit-crushing lyrics, as well as a melody that borders on the hummable. “Lucifer’s Slaves” merges its Satanic worship with a surging riff and perky melody, along with the requisite crashing drums, downtuned bass, and unpleasant thoughts. Album closer “Saturn Dethroned” works some cheesy farfisa-style church organ into the mix, because why the Hell not?

Any listener even remotely interested in the current state of heavy music should give Electric Wizard a listen, and Time to Die is as good a place to start as any. Go in pieces, my children.