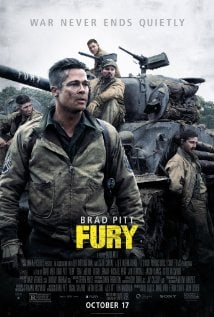 [xrr rating=2.75/5]I recently stumbled upon Emmanuel Guibert’s Alan’s War, a graphic novel that tells the true story of Alan Cope, an American tank driver at the end of World War II. Using text straight from his interviews with Cope, Guibert’s book is thoughtful and sensitive, a window into the soul of a young man who went to Europe to fight and came back irrevocably changed. Cope’s existential crisis doesn’t come from page after page of brutal violence, but uses war as a chaotic place where his past convictions can be shaken. Director David Ayer’s new film, Fury, is set in the same milieu, but lacks any of the nuance of Cope’s story. Instead, Fury uses its graphic war scenes as a place where men lose their innocence, a simple message portrayed with ham-fisted gore and stock character types.

We’ve seen these guys before. Brad Pitt stars as Don “Wardaddy” Collier, a hardened sergeant who commands an M4 Sherman tank and has no problem knifing a Nazi through the eye but still clings to a code of conduct that many others have shed since coming to Europe. Rounding out Collier’s crew are the god-fearing gunner (Shia LaBeouf), a big, strong, dumb redneck (Jon Bernthal) and the token minority (Michael Peña). While none of these characters do much to rise above his trope, worst of all is new guy Norman (Logan Lerman), a young typist assigned to replace a character killed before the movie begins. Terrified and unwilling to kill, it isn’t long before Norman gloms to Collier’s tough-love strategy and becomes a hardened soldier.

Like in his past films, Ayer uses Fury to explore what it means to be a man, but it all feels horribly hollow and unnecessary. World War II is not exactly a historical moment that Hollywood has yet to explore and most of Fury fails to bring anything new to the table. If the movie is about Norman’s loss of innocence, Ayer couldn’t have presented the fall in a less paint-by-numbers way. By the film’s end, the young man will go from cowering to fighting and fucking like the other grunts that surround him the tank. It’s just the progression doesn’t feel earned or believable.

None of the characters here is particularly likable. That’s fine, war isn’t a good place. But when juxtaposed with anonymous Nazi bad guys, the characters just feel flat on the screen, especially when compared to the rascally behavior in Samuel Fuller’s The Big Red One. There is a been-there-done-that feeling that pervades most of the film. And that’s a shame because there aren’t many WWII movies set inside a tank. Of course, Ayer doesn’t commit to the tank like Samuel Maoz did in Lebanon. The characters spend a good deal of time outside, interacting with other soldiers and Germans.