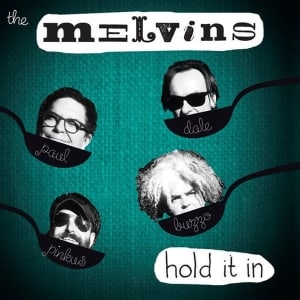 [xrr rating=3.5/5]Some visitors are conscientious, happy to drop by and help with the chores, but they’d never overstay their welcome or be too forward. Others are more domineering, taking over the house and disrupting everything. On Hold It In, Buzz Osborne and Dale Crover of the Melvins invited Paul Leary and J.D. Pinkus of the Butthole Surfers to the party, and these guests moved in and joined the family. Rather than mere featured performers, Leary and Pinkus became equal collaborators on the album, which couples the Melvins’ characteristic metallic crunch gristle with the Surfers’ twisted art noise. That combination stays true to each band’s modus operandi while offering some very interesting surprises.

The super group eases into the partnership with “Bride of Crankenstein,” which has the Melvins taking the lead. The sludgy heavy metal opening sets up a steady methodical grind. The track is dedicated to a classic head-banging groove. Basso rhythm guitar provides a rough foundation for buzzsaw accent fills, while the background is choked with chaotic static. The bridge opens up the tune, beginning with a flickering electronic reference to Edgar Winter’s “Frankenstein” that ushers in a new harmonic progression. The song rips into these chords to soften the ground for a pair of guitar solos that show off Leary and Osborne’s different styles. First, Leary lets fly a burst of loose, double-stop bends that decay into sloppy chromatic flail, releasing some of the simmering tension of the piece. Osborne closes out the interlude with a brief but wicked run that starts out as a smooth wail before tightening into a sweet bit of shred.

Two songs later, we get a better sense of this four-headed beast with “Brass Cupcake.” At first, it’s just a crunchy rocker with an interesting vocal arrangement. Osborne gamely lays out the surrealistic, simplistic lyrics, while Leary periodically drops in to repeat whatever line just passed by with a scream, like a disturbed Greek chorus. Those intervals of echolalia are backed by distorted waves of guitar. The tune then falls into a low-fi Van Halen breakdown before moving into a strong, hard rock bridge. But the rock crumbles into a spacey, Alice-in-Wonderland ending, full of warped fragments. With no firm sense of transition, we find ourselves immersed in the following trippy track, “Barcelonian Horseshoe Pit.” Deep in avant-garde Butthole Surfer territory, we’re trapped in a disoriented fun house with weird tonal flashes which are mutated and chopped with back-mask. This ungrounded drift lasts for a solid two-plus minutes before coalescing somewhat into a dismal pseudo-song that takes its inspiration from Bauhaus’ “Bela Lugosi’s Dead.” Amid drum solos, hazy confusion and bits of baleful guitar, the band tenders this as their soundtrack for when the nightmare monsters finally tear through and press themselves into our world. This song pairing shows how the two bands complement one other, a yin-yang of driving rock and amorphous experiment.

Like much of the Melvins’ back catalog, Hold It In may focus on heavy proto-grunge, but actually delivers a range of musical flavors. The band’s staying power owes a lot to their out of the box thinking. While Leary and Pinkus help that along here, there are other intriguing side steps, like the electro-pop feel of “You Can Make Me Wait,” the deconstructed garage glam of “Eyes On You” and the zombie western twang of “I Get Along (Hollow Moon).” One of the best is the meandering track, “The Bunk Up.” A stutter beat rhythm sets a nü-wave funky mood with an angular punch while the theatrical vocals are reminiscent of The Tubes’ more artsy work. That initial section gives way to an edgy perspective of an arena rock bridge. As that wraps up, rather than just falling back to the opening changes, the tune roams further afield with a mellow jam band groove, full of back-masked melodic musing. Eventually, the lazy flow finds its way back into the dark, with sneering vocals and a goth metal gait. There’s nothing predictable about it, but it truly satisfies.

Osborne has long idolized Leary for his playing and Hold It In is probably all he could have hoped for. In any case, it succeeds in showing how well the Melvins could integrate the Butthole Surfers’ avant-garde spin into their musical house. The album features a fair amount of redecorating and adjustment, but all time-shares should run this smooth.